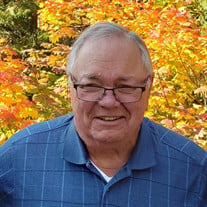 Warren (Butch) Murdock Fordyce Jr., 81, of Yakima, passed away on March 23, 2022, surrounded by family. Warren was born to Ethel (Smith) and Warren Fordyce on February 9, 1941, in Sunnyside, WA. Warren was a standout athlete in track and football in high school and, after graduation, moved on to Central Washington University where he joined the trampoline team and performed during halftime at basketball games. After leaving CWU, Warren joined the Army as part of the 101st Airborne Division. Shortly afterwards, he married his high school sweetheart, Madelyn (Penny) Sterrett. They moved to Fort Campbell, Kentucky, where Warren was stationed, rising to the rank of Sergeant before leaving the service. His time in the Army jumping out of airplanes awakened a desire to continue spending time in the air. After leaving the Army, he and Penny returned to Sunnyside, where he decided to attend flight school. After completing flight school, Warren and Penny moved to Yakima, where they raised their daughters, Lori and Susan. Warren began work at Noland Decoto Flying Service where, in addition to piloting aircraft for customers, he taught flight school to the next generation of pilots in the Yakima Valley. Warren spent 40+ years as a corporate pilot doing what he loved most – flying the planes he loved, including King Airs, Aero Commanders and Citation Jets. Warren’s love of flying extended beyond being behind the controls. He served as a Director of the Yakima Air Fair for many years and continued to bum “second seat” on flights with his friends after retirement. Sports continued to play an important role in his life – he played tennis and slow pitch softball and was an avid golfer up until the week he passed. When he wasn’t playing sports, he was watching them – he was a lifelong fan of the Seahawks, Mariners, Huskies, Cougars and Zags. Warren loved spending time with his family, either at their homes or on family trips. Travels to Hawaii, London, Scotland, Ireland, Australia and Alaska created albums full of memories. Warren was preceded in death by his parents and his younger brother Jack. He is survived by Penny, his wife of 61 years, his daughters, Lori (Jamie) Straus and Susan (Mark) Smith and his grandchildren Jacob Straus and Molly and Bradley Smith and grand-dogs Maggie and Izzy. He is also survived by his sisters Ardean Fox, Lee Ann Fordyce, Jean Uebelacker and Joyce Benoit. A celebration of life has been scheduled for Saturday, April 2nd at 11:00 AM at Mount Olive Lutheran Church, 7809 Tieton Drive, Yakima. Reception to follow. Memorials may be made to the Yakima Humane Society. Valley Hills Funeral Home is caring for the family. Memories and condolences can be shared at www.valleyhillsfh.com.

Warren (Butch) Murdock Fordyce Jr., 81, of Yakima, passed away on March 23, 2022, surrounded by family. Warren was born to Ethel (Smith) and Warren Fordyce on February 9, 1941, in Sunnyside, WA. Warren was a standout athlete in track and football... View Obituary & Service Information

The family of Mr Warren "Butch" Murdock Fordyce JR created this Life Tributes page to make it easy to share your memories.

Send flowers to the Fordyce family.