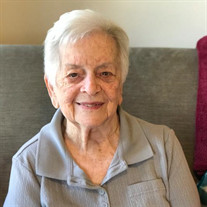 Virginia was born on Nov. 9, 1925, to Hugh and Lela (West) Monahan, in Salina, Kansas. She had an idyllic childhood there, growing up with her younger sister, Mary Lois. She graduated from the National College of Education in 1947, the same year she married Arthur Clevenger, whom she met on a blind date. Before moving to Washington, Ginny taught elementary school in Kansas, Iowa, Oklahoma, and in Arizona, where she held class in a quonset hut on the White Mountain Apache Indian Reservation. In 1959, Art was invited by colleagues to join them in starting a new osteopathic hospital. With their first daughter in tow, and pregnant with their second, they traveled out west to Sunnyside, where they remained for over thirty years. Virginia taught at Outlook Elementary school until 1968. In addition to raising their four children, and helping care for her family's large assortment of animals, Ginny was very involved in her community. She sang in the Presbyterian Church choir, and was a longtime member of her local PEO chapter. She also dedicated many hours to the Women's Hospital Guild and the Sunnyside Historical Museum. Virginia became a serious genealogist. Before the days of the internet, this meant spending countless hours reading microfiche and decoding the handwriting of long gone census takers, along with letter writing, phone calls, and even a cross country road trip. The crowning glory of her efforts was proving lineage to become a member of the Mayflower Society, which had been a wish of her maternal grandmother's. In 1991, Ginny and Art retired to Terrace Heights, where they had the good fortune of becoming very dear friends with several neighbors. After her husband's death in 2011, Virginia spent several pleasant years in an apartment at Living Care in Yakima, where she enjoyed lively games of Scrabble and the community garden. It wasn't until she was 94 that she moved to an assisted living facility. Ginny was warm, generous, and quick to laugh. She had a way of making people feel at home and genuinely valued. Her door was always open, and all were welcome. She was dearly loved by several of her children's friends. In her later years, she took delight in making things for others. She knit hats for preemie babies and cancer patients, and, when in her nineties, knit afghans for her grandchildren as wedding presents. Her apartment doorway was always creatively decorated for others’ enjoyment, and she was constantly engaged in small acts of kindness, such as delivering handmade May baskets to the doors of friends, or making small centerpieces for community dining tables. The tremendous impact she made in other's lives was evidenced by the many visitors, letters and flowers she received in the last weeks of her life. Ginny is survived by her four children, Cindy Clevenger (Bill Fincke), Lisa Clevenger (Marty Sievertson), Hugh Clevenger, and Christy Clevenger (Brent Scherer); her two grandchildren, Dylan Sievertson (Laura) and Aidan Sievertson (Ryan Kok); and her devoted niece Karen Hill and family. Anyone wishing to make a donation in Ginny's memory may contribute to the Yakima Valley Audubon Society in her name. The family will hold private services later this spring.

Virginia was born on Nov. 9, 1925, to Hugh and Lela (West) Monahan, in Salina, Kansas. She had an idyllic childhood there, growing up with her younger sister, Mary Lois. She graduated from the National College of Education in 1947, the same... View Obituary & Service Information

The family of Virginia Mae Clevenger created this Life Tributes page to make it easy to share your memories.

Send flowers to the Clevenger family.