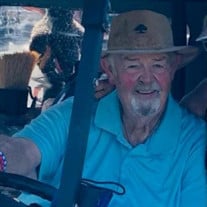 Ronald Dale Donaldson, 73, of Yakima WA, passed away peacefully with his family by his side at Cottage in the Meadow on March 3, 2021 just in time to take his tee time to the clouds. He was born September 5, 1947, the son of Russell and Carol Donaldson, and the big brother to Ken Donaldson. During his youth, Ron was active in sports. He began bowling as a child and averaged 197 as an adult. He also enjoyed youth baseball and was proud to be a part of the ‘65 state champion Yakima Legion team. He shared his love for sports by coaching six seasons of middle school sports. Hunting and fly fishing were also on his list of favorite activities. Anyone who knew him was well aware of his enthusiasm for golf that started in 1978 and lasted until the end. During his golf career he won two championships at the Elk’s Golf and Country Club and his natural skill earned him seven holes in one! Ron attained his education in the Yakima School District, graduating from Davis High School with the famous class of ‘65. From there he went to Central Washington University where he majored in music education and composition. His highlight was having the honor of being tutored by the world famous composer Paul Creston,and graduating in 1969, the same year he married his first wife, Sheryl Liebert. Mr. D., as his students called him, never worked a day in his life. His passion for teaching nurtured an amazing career where he taught magnificent musicians as well as those who loved performing in music groups. Everyone was welcome in his band and choirs. Mr. D. has maintained contact with many of his former students and if any of them spotted their former teacher in public they greeted him with a warm smile and open arms. The last 16 years of his 30 years of molding young, musical minds were spent dedicated as the Davis Buccaneer Band Director. Following his retirement Ron spent as much time as he could at the Elks golfing with is wonderful wife or winning bets with golf “pigeons”. He also enjoyed his trips to Maui with family, flying south with his Wife every winter to Rancho Mirage, and spending quality moments with friends and family. Ron is preceded in death by his parents Russell and Carol Donaldson. He is survived by his beautiful wife, Lo, of 25 years; his brother Ken (Terri) Donaldson; five children: Brian (Jeannie) Huck; Becky (Brad) Wickenhagen; Scott (Jenn) Huck; USAF Capt. Christopher (Janea) Donaldson and Lisa Donaldson. Also ten grandchildren and three great grandchildren. At his request there will be no formal services. Donations in Ron’s memory can be made to Yakima Elks Golf and Country Club Rose Garden Memorial. Please visit www.ValleyHillsfh.com to share a memory or condolence with the family.

Ronald Dale Donaldson, 73, of Yakima WA, passed away peacefully with his family by his side at Cottage in the Meadow on March 3, 2021 just in time to take his tee time to the clouds. He was born September 5, 1947, the son of Russell and Carol... View Obituary & Service Information

The family of Ronald Dale Donaldson created this Life Tributes page to make it easy to share your memories.

Send flowers to the Donaldson family.