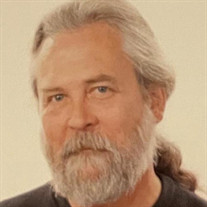 Rodney (Rod) Jones, husband, father, grandfather, brother, and friend, passed away peacefully at home on April 27, 2022. Rod was born in St. George, Utah in 1950 and grew up in Salt Lake City. Rod never knew a stranger. As the cut up of his family, he seemed to always find the humorous side of a situation. It was as if he was born with the gift of insight into the temporary and changeable aspects of life. He was sensitive and kind to others. A real support for those in need, not just for people, but all living things. We will miss him terribly. Shortly after moving to Yakima in 1970, Rod met his wife, Mary. They would have celebrated their ‘50th’ anniversary in December. Rod was always extremely proud of his children and their accomplishments. When his grandchildren arrived, he was eager to share his vast knowledge with a new generation. They brought great joy to his life. Rod had a genuine appreciation for human ingenuity. He was a collector of clever and unusual devices, if they were broken or incomplete he knew how to fix them. He enjoyed the challenge of making them work again. Rod thrived in the summer time in his backyard oasis: refinishing and restoring antique finds from estate sales, daily rides on his Harley, hosting family and close friends for barbecues featuring his ‘Famous Ribs.’ In his younger years, he enjoyed pheasant hunting with his son and brother-in-law, ‘Wild Bill.’ They seldom came home without their limit. Rod worked for Boise Cascade for thirty-seven years where he met his lifelong friends, Howard, Willie, and Ron. He treasured their friendship. Rod was preceded in death by his father and mother, LaWana and Victor Jones, nephew Wesley, sister-in-law Connie and brothers–in-law Bill and Jim. He is survived by, his wife Mary, son Benjamin and daughter Emily. Grandchildren Isabella, Hugo, and Arlo. Siblings, Dr. Victoria Jones, Stephen and Terry Jones and his nieces and nephews. At Rod’s request, there will be no service. There will be a family memorial at a later date.

Rodney (Rod) Jones, husband, father, grandfather, brother, and friend, passed away peacefully at home on April 27, 2022. Rod was born in St. George, Utah in 1950 and grew up in Salt Lake City. Rod never knew a stranger. As the cut up of his... View Obituary & Service Information

The family of Rodney Jones created this Life Tributes page to make it easy to share your memories.

Send flowers to the Jones family.