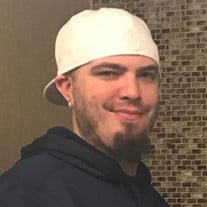 Robert Smith was born on February 21, 1989, to David Smith and Tuesday McCoy. On March 28, 2021, he passed away at Virginia Mason in Seattle, Wa with family by his side. Robbie grew up in Gleed where he attended school at Naches. Ever Since he was little Robbie loved sports from playing to watching he could truly tell you anything you wanted to know about baseball, football, bowling, soccer, he loved it all. Robbie loved staying busy with friends and family especially when it came to going on adventures with his grandparents and his sister, it was something he always cherished. After graduating in 2007 Robbie went to Perry Tech where he got his degree in HVAC while also working at Round Table until 2012. Soon after that his career took him on another path where he began to work at the Ranch Tavern for Tracy Brachtenbach. He had known Tracy through her boys, Jeffrey and Jeremy. Robbie had grown up with them and considered them brothers as well as Tracy his second mom. He had truly found something he enjoyed doing. While working at the Ranch he had joined a pool league, which led to many tournaments, through the Ranch and pool he had made many lifelong memories and friends he considered family. Robbie found happiness through all, but especially with his girlfriend Kim who he had found love with. Robbie cherished his time with his friends, however, his time with family is something he loved and valued deeply. His sister, niece, and nephews held a special place in his heart and if ever they needed him he would be there within a blink of an eye. Uncle Robbie was a huge part of their lives and will forever and always be loved and missed. Robbie was the son, grandson, brother, uncle, boyfriend, and friend that was always there for a laugh, a pep talk, a shoulder to cry on, and everything in between. Robbie is and was more than all of that, he was the one who gave all his love to you, the one who was your biggest supporter, he was someone who always made sure you were a 100 percent before himself, in other words Robbie was the most selfless person to anyone who had the gift of knowing him. He will forever be loved and reflected through his mother, Tuesday McCoy(Roy McCoy), his sister, Heather Stafford(Lance Stafford), his niece, Alexis Hernandez, his nephews, Junior Hernandez, and Brody Stafford, his grandmother, Marlene Lundberg, his girlfriend, Kimberly Miller, and many more family and friends that were lucky enough to be loved by Robbie and know him. Robbie is proceeded by death by his grandfather, Les Lundberg. We will be having a celebration of life on Saturday, May 15, 2021, at 2:00 pm. It will be held at the Broadway Grange 909 W. Washington Ave.

Robert Smith was born on February 21, 1989, to David Smith and Tuesday McCoy. On March 28, 2021, he passed away at Virginia Mason in Seattle, Wa with family by his side. Robbie grew up in Gleed where he attended school at Naches. Ever Since... View Obituary & Service Information

The family of Robert Smith created this Life Tributes page to make it easy to share your memories.

Send flowers to the Smith family.