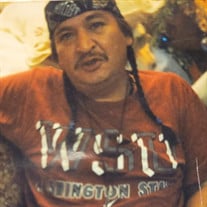 Our beloved Richard Donald Moore II has been called home by the creator. He passed away at home on Friday January 28th, 2022. Richard was born August 4th, 1957 in Toppenish Washington to the late Delores Pimms-Moore and Richard Moore I. Throughout his life he lived in many places including Michigan, Germany, and Washington state. He had attended a program at JM Perry for 18 months before he decided he would rather be a cook. He was a sous chef at Heritage restaurant in Toppenish when they had first opened. He then moved to the Tacoma area where he managed other restaurants throughout his time there. Later on, he worked at the Yakama Nation Legends Casino for some time. After many years in the food business, he decided to follow his heart and moved down to the Columbia River. Although this had been his home for many, many years, he had finally decided to make it permanent. Much of his life he was a fisherman but due to a neck injury he became a processor. Remaining a river man he cleaned, dried, smoked, and canned fish. He also canned many other fruits and vegetables and enjoyed teaching the process to anyone who was willing to learn. Richard had so many talents and was always busy making whatever his heart desired. He did beadwork, making earrings, necklaces, and bracelets. He also perfected the art of basket making, so many people are familiar with his beautiful work. He made nets as well as repaired them, this was a talent taught to him by his grandfather. Richard is survived by his eight children, Richard Moore III, Dawn Moore, Daniel Sherwood, Shamira Moore, Calvin Moore, James Hooper, Janie Hooper, and Jerry Dick. His many grandchildren including Brianna Moore, Mikhaela Moore, Aleatha Caldera, Vanessa Moore, Brooklyn Caldera, Miikah Ann Caldera, Adjrian Swan, Kyleigh Slockish, Angela Slockish, Michael Slockish Jr., Thomas Henry Jr., Daniel Hoptowit-Craig. Siblings Roxane Moore, Ralph Moore, Ronda Moore, as well as Robert Moore, and Tammy from Detroit, Michagan. Many other friends that were family. He is preceded in death by his mother Delores Moore, Father Richard Moore, Brother Roy Moore and Ray Pimms as well as his son Dorian Moore. Richard was a very proud and strong man, and to some a hero. He lived life on his own terms and enjoyed every moment of it. His stories as well as his presence will be greatly missed by us all.

Our beloved Richard Donald Moore II has been called home by the creator. He passed away at home on Friday January 28th, 2022. Richard was born August 4th, 1957 in Toppenish Washington to the late Delores Pimms-Moore and Richard Moore I. Throughout... View Obituary & Service Information

The family of Richard Donald Moore II created this Life Tributes page to make it easy to share your memories.

Our beloved Richard Donald Moore II has been called home by the...

Send flowers to the Moore family.