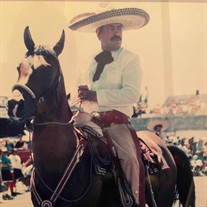 Rafael Villasenor (Anaya) passed away on the morning of January 30, 2021 after a prolonged illness. He was born October 5, 1948 along with a twin brother, Francisco (Pancho), in San Antonio de los Macedo, Jalisco, Mexico to his parents, Rosalio Villasenor (Macedo) and Maria Consuelo Anaya (Cuevas). Rafael was the 4th oldest of 12 children. His siblings are Teresa, Jose, Pancho, Lazaro, Salvador, Miguel, Carmela, Maria de Jesus, Consuelo, Rosa, Francisco (Chico), and Rosalio (Chalo). In 1966, Rafael married Emilia Macedo (Fregoso) in Los Volcanes, Mexico. Together, he and Emilia had 9 children over the next 20 years. In the early ‘70’s, life took Rafael and eventually the rest of the family to Chicago which was a huge change from the small town that they were from in Jalisco. He joined a couple of his Uncles that were already living in Chicago and working in the steel mills, which is where Rafael worked while they lived there. In 1979, he and Emilia moved the family to southern California to be close to their family that were living there. He drove a truck in the delivery industry during the 3 years that they lived there. In 1982, they made the decision to move back to Mexico to help Rafael’s father, Rosalio, on his large cattle ranch and farm. A short time later, with son’s Ricardo and Ruben’s help, they opened a small takeout restaurant, Pollo Lucas, preparing and selling fresh pollo asado (grilled chicken) including raising the chickens, the first of the Villasenor family’s restaurants. In 1985, opportunity came to move to the Seattle area to work for the owners of Aztec restaurants, whom they knew from a neighboring town in Jalisco, with the eventual plan to open up their own restaurant. That dream was fulfilled in early 1990 when they opened up Villasenor’s Mexican Restaurant in Toppenish, WA with eventually a second location in Yakima in 1993. Rafael was the lead chef in Toppenish and Emilia was known for welcoming guests when they arrived. At some point over the 25+ years that Villasenor's restaurant was in operation, each of their 9 children worked there including some of their grandkids. They were well known throughout the Yakima Valley for their delicious home cooked Mexican food. Rafael, along with son’s Ricardo, Ruben and Rafael Jr, were well known for their Mexican dancing horses and they regularly performed in parades & rodeos throughout the Northwest. He and Emilia owned a ranch in Toppenish where he grew alfalfa & corn for his horses & cattle along with a large vegetable garden. Many of his grandkids learned to ride horses and drive a tractor alongside him. Rafael was known for loving a party with lots of food, and a mariachi band and he would invite family, friends and just about anyone that he met to join him. He and Emilia are longtime members of St Aloysius Catholic Church in Toppenish. Rafael is survived by his wife, Emilia, and nine children & 21 grandchildren; Raquel (Paco - Paquito, Luis, Rafa, Carlos, Santiago), Ricardo (Alice - Ariel, Jacob, Julia), Ruben, (Luz - Aliya, Elyse, Mario), Rosie (Phil Winterholler- Adrian, Vanessa), Rebeca (Cheech - Lily, Andy, Edgar), Rey (Alexandra Terjeson), Rafael Jr. (Lupe - Oscar, Brianna), Ruby (Bela, Adriana, Emmi), Raul (Oneyra) and 1 great grandson, Paquito.

Rafael Villasenor (Anaya) passed away on the morning of January 30, 2021 after a prolonged illness. He was born October 5, 1948 along with a twin brother, Francisco (Pancho), in San Antonio de los Macedo, Jalisco, Mexico to his parents, Rosalio... View Obituary & Service Information

The family of Rafael Villasenor created this Life Tributes page to make it easy to share your memories.

Rafael Villasenor (Anaya) passed away on the morning of January...

Send flowers to the Villasenor family.