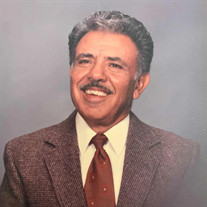 On Friday, April 1, 2022, our beloved husband and father, Rafael (Ralph) N. Lopez, is now resting with our heavenly father. He was 91 years old. Ralph was born on November 24, 1930 in La Piedad, Michoacan, Mexico. At the age of 15, he left home to begin a new life in the United States. He traveled over many states, did agricultural work and worked on the railroad. He finally settled down in Washington, and on July 19, 1955, he married Esperanza after a 5-year long courtship. They raised three children and were married 66 years. Ralph was a hard-working farm laborer. In 1964, he had a life changing work accident. With only a 3rd grade education, overcoming the language barrier and injury, he went on to attend and received his certificate in body and fender repair from J. M. Perry Institute. He started working for Pabisz Motor in Toppenish and soon after opened his own body shop in Wapato. He became a U.S. Citizen in 1967. In 1973, he built and owned Motel 97 in Wapato, while running his own body shop. In 1978, they sold the businesses and moved to Yakima, opening up another body shop with his son, Michael. Ralph retired in 1985, leaving his son, Michael, to run the business. Following retirement, Ralph built his dream home near a creek and spent all of his time working on his yard, flowers, and garden. He loved the peacefulness and beauty of being outside and listening to the water flow. He enjoyed sharing those times with his grandchildren when they would visit. He always found something that needed to be done. He was never idle; never stopped working until his last day. Ralph was a great man with a heart of gold. He was a good son, a loving husband, provider, and father. Ralph fulfilled his dreams by leaving home at a young age and coming to the U.S. He went from working as a farm laborer to becoming a successful businessman. He overcame many obstacles and would always remind us, he owed everything to his faith and love of God. Without his faith, he would not have accomplished all that he did. And he was so grateful. He loved his wife, his children, grandchildren and great-grandchildren. He loved his daughter, Mary, and said his life changed the day she was born. He lived for teaching and watching Michael play baseball. He was so proud of Ralphie and felt so blessed when he moved next door. He never missed a family get-together and enjoyed seeing the love that always surrounded all of us. He will be remembered with much love and affection, and will be greatly missed. He can now finally rest. Ralph is survived by his wife Esperanza (Sarah) of 66 years; his daughter Mary (Art) Garza, his sons Michael (Dawn) Lopez and Ralph (Pamela) Lopez Jr., all of Yakima. 7 grandchildren (Michael, Artie, Erika, Eric, Lisa, Lynzee and Rocky; and 4 great-grandchildren (Tyrie, Izaak, Alessandra and London). Celebration of Life will be planned in the near future.

On Friday, April 1, 2022, our beloved husband and father, Rafael (Ralph) N. Lopez, is now resting with our heavenly father. He was 91 years old. Ralph was born on November 24, 1930 in La Piedad, Michoacan, Mexico. At the age of 15, he left... View Obituary & Service Information

The family of Rafael Lopez created this Life Tributes page to make it easy to share your memories.

Send flowers to the Lopez family.