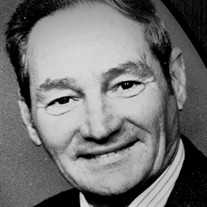 Paul R. Dillard of Grandview,Washington passed away on March 21, 2022 at the age of 93. He was the first born child of Paul R. Dillard and Gertrude M. Dillard of Martinsburg, West Virginia on October 5, 1928. The first of eleven children, five boys and six girls. Paul attended Martinsburg High School during the depression and then went on to graduate from Martinsburg Business College. Paul enlisted in the US Army Air Corps to become a pilot. He was stationed at Geiger Field, Washington where he met and married his first wife Lorraine F. Clark of Outlook, Washington. Paul and Lorraine had three sons. Paul is survived by Linnie P. Dillard (Chris), Darryl R. Dillard (Linda), Stanley B. Dillard and three step-children; Mitch Travis (Melissa), Michele Haslebacher (Craig), and Myra Mathews (Kurtis), many grandchildren and great grandchildren. After discharge from the Air Corps, he returned home to help his mother raise eight siblings. His father, Paul R Dillard passed away shortly before his discharge. On June 29th, 1950, Paul was ordered to active duty in the US Army and was sent to Korea for service. Upon return from the Korean War, he was again discharged to civilian life. In May 1952, Paul was again ordered to active duty to train soldiers for the Korean War. At that time, Paul decided to choose the service as a career. During his twenty two years of active service his duty stations were Goose Bay, Labrador, two tours in Korea (war and peace time), Germany and Republic of Vietnam. He retired from the service on 30 September 1968. He made his home in Sunnyside, Washington accepting employment from Old National Bank, Anderson Motor Company, and the Washington State Department of Motor Vehicles. After Paul’s second retirement he purchased a 40 acre farm on the Satus to raise cattle. On July 20th 1985, Paul and Grace Todd were married. Grace Todd passed away in 1987. Paul married Barbara J. Myers of Sunnyside on December 30,1989. The two fell in love immediately and that became the basis for a wonderful life together for 29 years. During those years they traveled many winters to Quartzsite, Arizona and took a 10 day Alaskan tour. They also took many trips throughout the United States to include a six week tour to Branson, Missouri. Wherever you saw one of them, the other was close by. This was truly a union made by the grace of God. Then, unexpectedly in January 2018, Barbara passed away. In addition to the two wives, Paul was predeceased by his parents; one son, James Michael; three brothers and one sister and one step son Michael. He was a devoted family man and he loved his family very much. Also, he was fortunate to have many friends who were always available when he needed them. He was always ready and willing to help anyone in need. He served his country well and received many awards and decorations for his service. They include 6 good conduct medals, a bronze star medal for meritorious service in Vietnam, and many more. Paul was loved and will missed by all Viewing has been scheduled for Friday March 25, 2022 from 2-4pm at Valley Hills Funeral Home in Sunnyside. Funeral Service will follow on Saturday March 26 at 1:00pm at Valley Hills Funeral Home in Sunnyside with burial to follow at Lower Valley Memorial Gardens.

Paul R. Dillard of Grandview,Washington passed away on March 21, 2022 at the age of 93. He was the first born child of Paul R. Dillard and Gertrude M. Dillard of Martinsburg, West Virginia on October 5, 1928. The first of eleven children,... View Obituary & Service Information

The family of Paul Robert Dillard Jr created this Life Tributes page to make it easy to share your memories.

Paul R. Dillard of Grandview,Washington passed away on March...

Send flowers to the Dillard family.