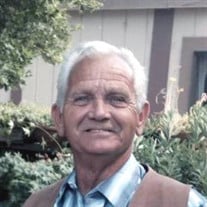 Michael Lee Williams (Mike) was born January 4, 1945, in Toppenish, son of George and Lorraine Williams. Mike passed away on February 21, 2021, surrounded by his wife and children. He is survived by his wife Gail and 3 children, Paula Kelso (Kurt), Robin Enzminger (Lindsay), and Alan Williams, his sister Sherry Hoon (Chris), many grandchildren, a few great-grands, nieces, and nephews, and numerous cousins. Mike attended Buena Grade School, and later Toppenish High School, graduating in 1963. In 1964, he married Gail Davis. After school graduation, Mike joined the Carpenters Union and later took a welding class. Welding was a better fit than carpentry, so he went to work for Willard Logsdon of Logsdon Welding. He later purchased the business and was a fixture fabricating and mending farm equipment and irrigation mainlines for farmers and ranchers of the area. Later, he worked for Pro Sales, doing stainless steel food quality welding all over the Northwest in wineries, juice and milk plants, and even a cheese factory, eventually owning his own business, Farstar Fabrications. Before he retired, he worked for 6 years for the Toppenish School District in their maintenance department. Mike was a Scout Master for the Buena Scout Troup. He also influenced and mentored a number of young men and women throughout his life. Hunting was his passion. He traveled to hunt in Oregon, Montana and Idaho for more than 25 years with his hunting and fishing buddies, Joe Stephens, Don Walsh, and Dan Brownlee. He was an archer, hunting with his bow after big game elk and deer. He was a member of the Kamiakin Roving Archers and the Satus Creek Lowlanders, a black powder club. Mike took pride in following his family’s activities, attending school functions, ball games, gymnastics meets, junior rodeo, and moto-cross competitions. In later years after the children were out of school, he and his wife put on and managed endurance rides (competitive distance riding on horseback) all over Washington State for over 20+ years. A large part of May and June each year was spent clearing horse trails at the Nile for the Renegade Rendezvous endurance ride. Following his grandchildren’s sporting activities was also very important, and many football, basketball, and fastpitch games were eagerly attended. The family would like to thank Memorial Hospice for their help and guidance during the final days. A celebration of life to honor Mike’s memory is planned for later in the spring.

Michael Lee Williams (Mike) was born January 4, 1945, in Toppenish, son of George and Lorraine Williams. Mike passed away on February 21, 2021, surrounded by his wife and children. He is survived by his wife Gail and 3 children, Paula Kelso... View Obituary & Service Information

The family of Michael Williams created this Life Tributes page to make it easy to share your memories.

Send flowers to the Williams family.