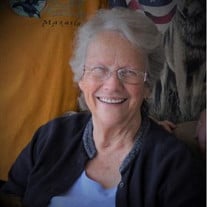 Mary “Ruth” was one of nine children born to Jesse A Reed and Enola (Cooper) Reed. She was raised in Oklahoma until the family moved to the Maricopa area of Arizona for work in 1950. Ruth’s family was working on a big farm in Maricopa when she met future husband Lawrence Hill. They had a whirlwind courtship and married April 19, 1953. Ruth and Lawrence had seven children Sandy, Randy, Mona, Jeffrey, Anita, Sharlyn and Steven. They made their way to Oregon where they resided for over 30 years in the Cherry Grove area before retiring to the Yakima, Washington area. Ruth came from a family with a strong faith and work ethic. Jesus, family, friends, love and faith were very important to Ruth. She made sure to tell you that she loved you and you felt it. Ruth was always a shining example of a strong Christian woman and strove to be a blessing to people and show them god’s love. Ruth and Lawrence provided a strong example of being a close, loving, faithful family that had family dinners every Sunday after church. They strongly believed in providing a helping hand to those in need. Ruth enjoyed photography, crocheting, gardening, canning, camping, playing games, attending bible classes and just being together with family and friends. She lives on in all the memories of family and friends, please honor her by showing your love to others. The family is planning to have a life celebration for Ruth sometime in the spring and will provide more information on Ruth’s Facebook account. Ruth was preceded in death by her husband, Lawrence Hill, son Jeffrey L. Hill, parents Jesse & Enola (Cooper) Reed, siblings Ruth “Arlena” Welcher, Eddith Watts, Francis “June” Van Atta, Grace Helen Montgomery, Dorothy “Jeanie” Butler, JB “Buster” Reed and Sharon Compton. Ruth is survived by her children and their spouses, Sandy & Jeff Roland, Randy & Dawn Hill of Forest Grove, OR; Mona Hill of Chesapeake, Virginia, Anita & Andy Dale, Sharlyn & Jason Renner and Steven Hill of the Yakima, Washington Area. Sister, Betty Bowe of Sherwood, Oregon and Brothers & Sister In Laws and their spouses, Troy & Cherie Hill and Lucy Hill of the Farmersville, Texas area. Grandchildren Melody & Corey Kind, Melynda Roland & Wade Brackin, Alan Roland, Jarred Hill & Bonny Wyatt, Nicole Sweet, Justin & Jillianne Hill, Ryan Hill, Cody Hill, Carolyn Deskins, Elizabeth “Libby” Renner, Justin & Kristin Renner, Brandon & Delaney Renner and Cera Linnell. Twenty-three Great Grandchildren, numerous nieces, nephews, and extended family.

Mary &#8220;Ruth&#8221; was one of nine children born to Jesse A Reed and Enola (Cooper) Reed. She was raised in Oklahoma until the family moved to the Maricopa area of Arizona for work in 1950. Ruth&#8217;s family was working on a big farm... View Obituary & Service Information

The family of Mary Ruth Hill created this Life Tributes page to make it easy to share your memories.

Mary “Ruth” was one of nine children born to Jesse A Reed and...

Send flowers to the Hill family.