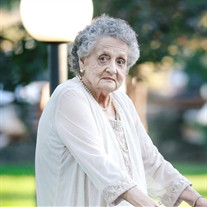 Marian Lillie Patterson was born to Harry L Cartmell and Mary C Boyer on December 5, 1931 in Sydney, Montana. She passed away at the age of 90 on March 27, 2022 at Kadlec Regional Medical Center in Richland, WA. Her granddaughter, Kerry Booth, was holding her hand and speaking to her about our Lord and Savior when He decided to call her to the gates of Heaven. Marian married Glenn Patterson on October 21, 1978. They were married for 36 years until Glenn’s passing on July 3, 2015. Together they lived a happy life on their ranch raising cows. Marian worked in fruit packing warehouses packing fruit for most of her career. Some of her favorite pastimes included gardening, crocheting, making dolls, sewing, baking, painting and spending time with her grandchildren and great-grandchildren. Marian had five siblings; Bud Cartmell, Harry Cartmell, Jerry Cartmell, Linda Phillips and Evelynn Rambler. She had six children; Jack James, Mary James, Bill Cartmell, Mike Ohms, Charlie Ohms and LaDonna Ohms. Marian is survived by her sons Jack James, Charlie Ohms, and numerous grandchildren, great-grandchildren, and great-great-grandchildren. She was loved by so many and will be greatly missed. The memories of her will live on forever in all of our hearts. John 14:1-3 “Let not your heart be troubled; you believe in God, believe also in Me. In My Father’s house are many mansions; if it were not so, I would have told you. I go to prepare a place for you. And if I go and prepare a place for you, I will come again and receive you to Myself; that where I am, there you may be also.” The funeral service will be held at Valley Hills Funeral Home on Wednesday, April 13th @ 10:00am- 218 W 3rd St. Wapato, WA There will be a graveside service to follow at Reservation Community Memorial Park- 5161 W Wapato Rd. Wapato, WA There will also be a luncheon after the graveside at the Fraternal Order of Eagles- 515 S Division St. Toppenish, WA

Marian Lillie Patterson was born to Harry L Cartmell and Mary C Boyer on December 5, 1931 in Sydney, Montana. She passed away at the age of 90 on March 27, 2022 at Kadlec Regional Medical Center in Richland, WA. Her granddaughter, Kerry Booth,... View Obituary & Service Information

The family of Marian Lillie Patterson created this Life Tributes page to make it easy to share your memories.

Send flowers to the Patterson family.