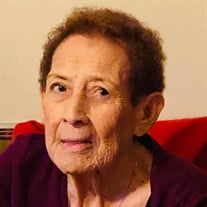 Maria S. Gonzalez, 89, passed away peacefully in the comforts of her home, under the warm loving hands of her sisters, sons, daughters, and numerous grandchildren on August 16, 2021. Mary was born December 26, 1931 in Worland, Wyoming, to... View Obituary & Service Information

The family of Maria Gonzalez created this Life Tributes page to make it easy to share your memories.

Maria S. Gonzalez, 89, passed away peacefully in the comforts...

Send flowers to the Gonzalez family.