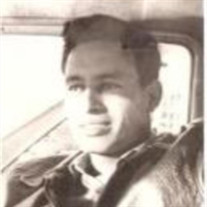 On January 24, 2022 our beloved father Louis Diaz passed on to eternal life at home surrounded by his family. Louis Diaz was born on February 25, 1929, in Gallup New Mexico to Juan Luis Diaz, and Tomasa Lara Diaz. In 1942 his parents moved to Wapato Washington where they settled. At 21 he was drafted into the army, deployed, and served in the Korean War. Louis earned 4 bronze stars, and an international medal of honor for bravery. Sadly, his father passed at a young age, Louis along with his younger brother Felix stepped in, they worked to provide for their mother and helped raise their younger siblings. In 1956 Louis met and fell in love with Manuela Ju Gutierrez; she had recently arrived from Mexico as a nanny to the famous minor league pitcher Hub Kittle. Louis and Manuela were married on February 23, 1957. They purchased a home in Wapato and together raised their 4 beautiful children: Sandra, Louis, Herman, and Lily Michele. Their marriage lasted 24 years. Moreover, their strong friendship, and loving dedication to their children lasted throughout their lives.  Louis received his degree as a civil engineer and worked for 30 years at the Yakima County Assessors Office. His name appears on all the maps that he drew. Everyone that worked with him knew that when they brought their children, or when his grandchildren would come to visit, Louis always had a drawer of candy waiting for them. Louis had a passion for fixing things, and in his spare time he loved working on cars. Whenever a family member was in need, he would drop everything to help them. He could fix anything! Louis married his second wife Ramona in 1987. They lived in Yakima, Washington until she passed in April of 2014. They loved spending time with his grandchildren, and great grandchildren. After his retirement, he would pick them up from St. Joseph’s every day. Afterward, Louis enjoyed making them hamburgers, taking them to KFC for chicken, or Costco for pizza! He proudly received a “Grandparents Award” for volunteering at many of his grandkids field trips.  Louis always said, “I want my grandchildren and great grandchildren to remember me. So I will do anything for my kids, family always comes first.” Louis is survived by his children: Sandra (Simon) Gaytan, Louis (Lori) Diaz, Herman (Kim) Diaz and Lily Michele (Glen) Isom Grandchildren: Louis J. Diaz, Raymond Gaytan, Brian Diaz, Andrea Gaytan, Heather Gaytan, Michael Diaz, Alix Isom, Simone Gaytan, Miles Isom, Michelle Diaz, Ashleigh Diaz. Great-Grandchildren: Aliza Prieto, Jocelyne Gaytan, Roxanne Alvarado, Mya Alvarado, Brooklyne Gaytan, Tristan Alvarado, Gabriel Gaytan, Aria Mendez, Anai Mendez, Andrew Gaytan, Abigail Mendez, Julio Viegas, Casey Diaz, Alyssa Diaz, Giselle Diaz, Brandon, Alexia Diaz, Jada Diaz, Alexander Diaz, Taylor Diaz. His sisters: Monica (Ricardo) Garcia, and Rachel (Joe) Molano. He is preceded in death by: His parents Juan Diaz and Tomasa Lara Diaz, brothers and sisters Juanita Diaz, Isabel Diaz, Rosalia Diaz, Luis Diaz, Melvin Diaz, Mary Dabalos, Eva Ybarra, Carmen Cardenas, Margaret Perez, Jessie Diaz, Felix Diaz and Esther Diaz Orozco. Join us for services: February 18th, 2022 Wapato Funeral Home  • Viewing 4:00pm – 8:00pm   • Rosary 6:00pm  February 19th, 2022 Holy Redeemer in Yakima  • Mass 9:00am  • Burial following mass at the Wapato Memorial Park (Wapato Cemetery)  • Fellowship and food following burial service back at Holy Redeemer

On January 24, 2022 our beloved father Louis Diaz passed on to eternal life at home surrounded by his family. Louis Diaz was born on February 25, 1929, in Gallup New Mexico to Juan Luis Diaz, and Tomasa Lara Diaz. In 1942 his parents moved... View Obituary & Service Information

The family of Louis Alexander Diaz created this Life Tributes page to make it easy to share your memories.

Send flowers to the Diaz family.