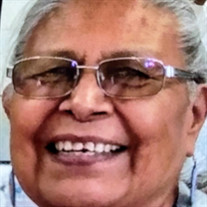 Leona Shippentower-Starr Loving Mother, Grandmother, Sister & Aunt has gone to be with our Creator. She spent most of her life in White Swan, WA, where she raised her children/grandchildren. She is survived by her brothers Tom Shippentower... View Obituary & Service Information

The family of Leona Ann Shippentower-Starr created this Life Tributes page to make it easy to share your memories.

Send flowers to the Shippentower-Starr family.