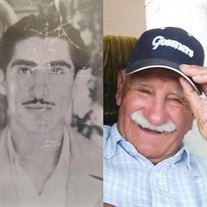 Enrique Barrera was born in Valadeces, Tamaulipas Mexico on July 16, 1921 to Ramon Donato Barrera & Viviana Rivera Barrera. He passed away on December 26, 2021 after a fulfilled life of over a hundred years. He is peacefully at rest (awaiting his future), along with his wife of 71 years, Sara Saenz Barrera, his son Donato Barrera, his Parents, his 7 siblings, & his lifelong best friend, Jesus Flores. He is survived by his 9 children: Viviana & (Manuel) Ramirez, Altagracia Barrera Peal & (Javier Perez), Enrique Jr & (Graciela) Barrera, Ana Maria Escamilla, Blanca Alicia Barrera & (Raul Mendoza), Felix & (Carmen) Barrera, Jose Luis Barrera, Emilia & (Martin) Salinas, & Sergio & (Elizabeth) Barrera. Enrique had 38 Grandchildren, 92 Great grandchildren, & 9 great great grandchildren. His mother passed away at a young age. Being so, he helped to raise his 11 younger siblings. From his early years, he started migrating with his father for seasonal work, passing through states from Texas up to Washington. They lived in camps & there he learned the value of hard work. He married the love of his life, Sara Saenz Barrera, on December 25, 1947. He then continued the tradition of migrating with his own family until they settled & bought a home in Grandview, Washington in 1970. Enrique tried to instill honesty in his children & motivated them to search for a better life through perseverance. It was important to him for his children to be upstanding people. He believed in God, had faith, & tried to live his life as a man his children would be proud of. He worked for Martin Puterbaugh for 20+ years, & often had his older grandchildren work with him- to teach them the value of earning their way, to give them a foundational work ethic, to show them how important it was to respect the life of a farm worker, to be thankful for all they had, & to share his love of music (especially Norteña). He was a man of integrity & lived a life of dedication to his family. His biggest accomplishment was having his property. He was proud to have given all he strived for to make his house a home & raise his family there. His tireless efforts of working long hours, days, & nights for most of his life, were appreciated by any who had the privilege of having been around him….because he proved that a life of fulfillment could be attained if you put forth diligence, & especially, LOVE. His kids each have individual stories of irritating antics they used to pull on him while growing up, but those will now stay as memories & stories to pass along. He loved his scratch tickets & was happy to share any wealth he had (be it food or money). It brought him great joy to see his grandkids enjoying an ice cream, eating his wife’s delicious cooking, & sharing stories with anyone who listened. His smile was infectious & he was often caught scratching his head during his moments of reminiscing. He was rarely seen without a hat & looked forward to sitting in his chair outside to shoot his slingshot. He was best known for his harmonica playing. That sound will be greatly missed.

Enrique Barrera was born in Valadeces, Tamaulipas Mexico on July 16, 1921 to Ramon Donato Barrera & Viviana Rivera Barrera. He passed away on December 26, 2021 after a fulfilled life of over a hundred years. He is peacefully at rest (awaiting... View Obituary & Service Information

The family of Enrique Barrera created this Life Tributes page to make it easy to share your memories.

Enrique Barrera was born in Valadeces, Tamaulipas Mexico on July...

Send flowers to the Barrera family.