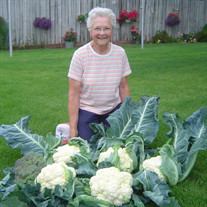 Ella Humann of rural Wapato died Friday December 10, 2021, at Landmark Care Center. She was born on August 31, 1925, in Friedenstal, Bessarabien, Ukraine, to Daniel & Lydia (Kappel) Grosshans. She married Artur Humann on June 1, 1946, at Pleidelsheim, Germany. The family immigrated to the United States on May 13, 1952. They first settled in North Dakota and then moved to the Wapato area in 1959. This is where she and her husband Artur developed their 20-acre fruit and vegetable farm which later grew to 48 acres. They were members of Hope Lutheran Church in Wapato, where Mom was on the alter guild. After Hope Lutheran closed, they joined Bethlehem Lutheran Church where she got involved with quilting, card playing and other activities, making many dear and lasting friendships. For 27 years, Mom was involved with RSVP (Retired Senior Volunteer Program) in Yakima for which she hand knitted over 2000 stocking caps for the needy. Family was very important to Mom; she was always there to give us love and support. We will miss her, but she is reunited with Dad now. After retirement Art and Ella moved to a house across the street from Heinz and Doris where Mom continued growing flowers and gardening, keeping both a show case for the many visitors they entertained. After Art’s passing in 1997, she continued caring for her house and yard until shortly before her passing. The ladies in her card playing group were always impressed by the beautiful flowers in her yard. Ella is survived by her son Heinz, daughter in law Doris, a granddaughter Jodi of Pullman, a grandson Brian, and his wife Michelle of Benton City. Ella was preceded in death by one sister and three brothers. In lieu of flowers, donations can be made to Bethlehem Lutheran Church or to a charity of your choice. A private graveside service will be held at 10AM on Thursday December 16, at Wapato Memorial Park Cemetery. Followed by a memorial service at 11:30AM at Bethlehem Lutheran Church 801 Tieton Dr., Yakima. A light luncheon will follow the service.

The family of Ella Humann created this Life Tributes page to make it easy to share your memories.

Send flowers to the Humann family.