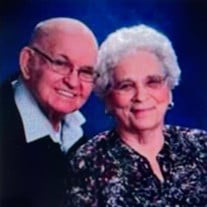 Dorothy Ruth Birdsall was born February 6, 1928 on her grandparents farm in Carpio, North Dakota to Sam and Clara (Tehelka) Birdsall. She passed away May 5, 2021, at Chaplaincy Hospice House in Kennewick at the age of 93. Dorothy was the second of five children. In 1934 the family moved to Sweet Home, Oregon where she grew up and graduated from high school in 1946. The day after her graduation she came to Prosser to join her family who had moved earlier in the year. She went to work at Towers Drug Store. In the spring of 1947, she met and married Joe Hughes following a six-week courtship. Joe and Dorothy bought property along (what is now) Wine Country Road. Through the years Joe built two houses on the property and they raised three children there. Dorothy and Joe joined Central Christian Church in 1956 and were faithful members for 50 years. When the church had to close, they transferred their membership to Prosser Presbyterian Church. Their Christian faith was the foundation of their marriage and family life. Dorothy attended Charm Beauty School in Yakima and graduated in 1966. She went to work at Pink and Pretty in Prosser and bought the salon a few years later. She owned and operated the salon for 25 years. After she sold it, she couldn't retire so she continued to do hair at a nursing home in Prosser for several more years. Dorothy loved sports and following the Prosser Mustangs until the age of 92 when ill health prevented her from attending the games. She also loved watching the Seahawks, Mariners, and Gonzaga on TV. She kept her mind sharp watching game shows, TV, doing word puzzles and loved every minute she got to spend with her family and friends. Dorothy is survived by her 3 children: Joe (Sonia) Hughes of N. Bonneville, Washington, Connie (Jim) Channel of Prosser, and Barbara Kowaleski of Madras, Oregon. Her grandchildren: Lynn (Kim) Channel, Heidi (Cip) Moreno of Prosser, Traci (Marshal) Eayrs of Pasco, Lyndsay (Joel) Hessel, and Christian (Torri) Kowaleski of Madras, Oregon. Great-grandchildren: Reid (August) Moreno of Spokane, Washington, Zoe Moreno, Zach Channel, Ian Moreno, Joe Channel, Noah Moreno of Prosser, and Dominic Hessel of Madras, Oregon, and her sweet great great grand-daughte Alice Moreno of Spokane Also Surviving are her two brothers-in-laws, Harold Hughes of Florida, Wes Hughes of Virginia and numerous nieces and nephews she loved very much. She was preceded in death by her husband Joe in 2015, parents Sam and Clara Birdsall, her sister Vivian Yotty, brothers, Lloyd, Duwaine, and Glenn Birdsall. A memorial service will be held on Saturday, May 22nd at Friendship Baptist Church in Prosser at 1 P.M. The family suggests memorial contributions be sent to Chaplaincy Hospice House in Kennewick or Jubilee Ministries in Prosser or the charity of choice.

Dorothy Ruth Birdsall was born February 6, 1928 on her grandparents farm in Carpio, North Dakota to Sam and Clara (Tehelka) Birdsall. She passed away May 5, 2021, at Chaplaincy Hospice House in Kennewick at the age of 93. Dorothy was the second... View Obituary & Service Information

Dorothy Ruth Birdsall was born February 6, 1928 on her grandparents...

Send flowers to the Hughes family.