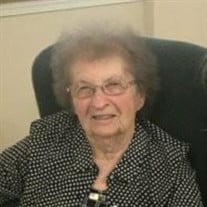 Donna Mae (Graham, Kraft) Dalton July 12, 1928 – January 19, 2022 Selah, Washington – Donna Mae (Graham, Kraft) Dalton was born July 12, 1928 in Summerfield, Kansas to Donald and Minnie Graham. She passed away peacefully at River View Assisted Living facility surrounded by her family on January 19 2022. She lived in Frankfurt, Kansas, until they moved to Wapato, Washington in 1942. She graduated from Wapato High School in 1948 and after graduating she met Alvin Kraft home on leave from the US Navy and they where married on July 3 1948. After Alvin was discharged from the Navy they moved to Toppenish where they lived with Alvin’s parents till their house was built. There they had four children Ron, Gary, Rick and Connie. They lived there for 47 years. Donna’s main love was sowing, cooking, and music. She worked for Del Monte for 39 years before retiring. Her main love was family and friends. She then met Homer Dalton and they was married in 2001 in Yakima, and they lived there till Homer’s passing 2016. She also traveled with friends in the Motor Home Group where she enjoyed her time with them. Donna was predeceased by her parents, her first husband Alvin, second husband Homer and three sisters Daphan Brown, LaVon Krienke, and Betty Schubert. She is survived by her four children, Ron (Carol) Kraft; Gary Kraft; Rick Kraft and Connie (Steve) Williams and her sister Juanita Green of Riverview Manor and numerous grandchildren, nieces and nephews. A memorial service will be held at Valley Hills Funeral Home in Zillah, Washington at 1:00 p.m. on Tuesday January 25, 2022, with graveside service following at Zillah cemetery where she will be laid next to her love of 46 years Alvin Kraft. The family invites you to attend the service and sign the guest book on Tuesday. I would also like to thank the staff at River View assisted living and the staff at Yakima Valley Memorial Hospital for all their hard work.

The family of Donna Mae Dalton created this Life Tributes page to make it easy to share your memories.

Send flowers to the Dalton family.