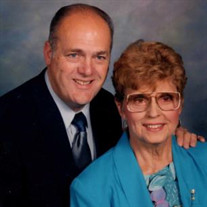 Darlene C. York died May 9, 2022, at Summitview Health Center in Yakima, Washington with her husband Gene by her side. She was 92 years old. Born in Beltrama County Minnesota, on March 2, 1930, to parents Ewald and Pearl Eickstadt, Darlene attended school in Bemidji and later went to a teacher’s college at Wessington Springs in South Dakota. In December 1950, she married Gerald S. Richmond, whose work took him to Casablanca, Morocco. Darlene soon followed by ship, crossing the Atlantic alone and arriving in Casablanca in October 1951, six months pregnant. Early the following year, she gave birth to their first child, Judi. A year later, the family traveled back to the United States on the RMS Queen Mary. The family moved often for work, and her second child, James, was born in Anchorage, Alaska, in 1953. Her son David was born in Woodstock, Illinois in 1956. The young family eventually moved to the Pacific Northwest in an Airstream trailer and settled down in a log cabin on 40 acres of land in Easton, Washington, where they developed a mink ranch. Gerald traded the trailer for 13 mink as breeding stock – the beginning of Silver Creek Fur Farm. Their third son, Russell, was born in Ellensburg in 1962. Over the ensuing years, Darlene lived in Easton, Leavenworth, Ellensburg, and Yakima. In later years, she enjoyed traveling and volunteering with the Sowers Ministry with her husband Gene Arthur York, whom she married in 1976. Darlene was preceded in death by her sons Russell and James Richmond, and is survived by husband Gene, daughter Judi Davidson and her husband Harry, son David Richmond, daughter-in-law Susan Richmond, 9 grandchildren, and 18 great-grandchildren.

Darlene C. York died May 9, 2022, at Summitview Health Center in Yakima, Washington with her husband Gene by her side. She was 92 years old. Born in Beltrama County Minnesota, on March 2, 1930, to parents Ewald and Pearl Eickstadt, Darlene attended... View Obituary & Service Information

The family of Darlene C York created this Life Tributes page to make it easy to share your memories.

Send flowers to the York family.