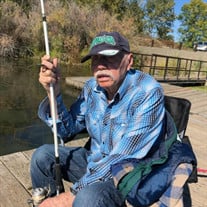 Cipriano Beltran-Lopez 83, died from complications from a stoke on February 11th 2022 in Granger, Washington. Cipriano is survived by his (wife) Gonzala Beltran, Delia Soto, Cipriano Beltran Jr., Cristal Zanbrano and 8 grandchildren: Graciela, Luis Adan, Felix, Jocelyn, Aileen, Makaylee, Damian and Jayla. His siblings: Micaela, Juan, Fortino, Manuel, Cloudualda and Eugenia. Cipriano was born on February 12th 1938 in Las Flechas Sinaloa, Mexico. To Cipriano and Gilberta Beltran. The eldest of 7 children he was involved in the upbringing of his younger siblings. He would wake up early in the morning to go work to bring money home to help his parents to pay the bills. In 1968, the Beltran Family moved to Ensenada Baja California Mexico. In Ensenada, he meets the love of his life Gonzala, they married in 1977 and moved to Granger, Washington in 1978. The couple helped raise Delia from a very young age and struggled for many years to conceive but, finally had a baby boy in 1985 and then had a baby girl in 1987. The family that Cipriano had prayed for so many years was complete. He supported his family by working as a cattle feed lot pin rider, rain, wind, snow or sunshine Cipriano was on his horse, removing sick cattle from the pins. Cipriano enjoyed spending time with his family and fishing at the Columbia River. Cipriano was a foodie and loved to eat all kinds of foods, some of his favorite were: beef steaks, chicken wings, menudo, pizza and seafood. His family and friends will remember him as a kind, patient, easy going, loyal and loving brother, husband, father and grandpa. Viewing will be held at Valley Hills Funeral Home & Crematory at 531 S 16th st, Sunnyside WA on February 25th from 5pm-7pm. Holy mass in honor of Cipriano will be at Saint Joseph Parish at 907 S 6th St, Sunnyside WA on February 26th at 11am followed by Burial services at the Outlook Cemetery.

The family of Cipriano Beltran Lopez created this Life Tributes page to make it easy to share your memories.

Cipriano Beltran-Lopez 83, died from complications from a stoke...