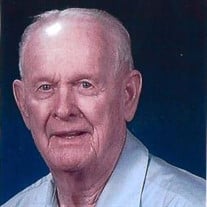 Warren A. Cooper, 98, of Yakima, WA passed away peacefully October 28, 2021. (UPDATE TO SERVICE TIME) Warren was born to James H. and Millicent (Rankin) Cooper in Hominy, OK on December 10, 1922. In 1940, he joined the Army, where he met Leola Nance at Camp Maxey, TX. He went up to the Philippines during World War II and returned to Paris, TX. Shortly thereafter they move to Oklahoma where he worked at the Chevrolet dealer in 1948. He moved the family to Seattle, WA where he joined the Washington Army National Guard as a full-time employee. In 1972, he transferred to the Yakima Firing Center and in 1980 after, 38 years, he retired as a CWO4. He is survived by his son Warren Lee Cooper (Hollie), brother-in-law Elbert Nance (Nancy), 6 grandchildren and 16 great-grandchildren and 8 great-great-grandchildren. He is preceded in death by his wife, his parents, two brothers, his daughter Peggy, grandson Brandon, his mother and father-in-law, three brother-in-laws and two sister-in-laws. One of Warren’s proudest accomplishments was being a member of the presidential honors during the visit of President John F Kennedy to the state of Washington on November 16, 1961. He will be dearly missed by those who loved him. A viewing has been scheduled for Wednesday November 3rd from 12pm to 5pm at Valley Hills Funeral Home Yakima Chapel (2600 Business Ln) Military Honors will be rendered on Thursday November 4th, 2021 at 3:00pm at Tahoma Cemetery in Yakima. Please visit www.ValleyHillsfh.com for service confirmations and to share memories with the family.

The family of Warren A Cooper created this Life Tributes page to make it easy to share your memories.

Warren A. Cooper, 98, of Yakima, WA passed away peacefully October...

Send flowers to the Cooper family.