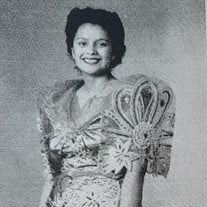 Rosa Dolores Tabayoyon-Brestar Born August 13th, 1932 in Everett WA to John Tabayoyon and Nora Spratt of Wapato Washington. Rosa passed away peacefully at 89 years of age, surrounded by her family Wednesday night September 22nd, 2021. Rosa was the eldest of her 3 siblings, and was raised on her mother and fathers farm in Wapato. She attended Wapato High School until the 11th grade. She married her first husband, Louis Castaneda (d) and had a baby girl, Stella, in 1951. She was crowned “2nd” princess at the Filipino Community Hall in Wapato in 1952, in which she became quickly involved. Rosa had 4 more children with her then husband, including Louis “Jr”, Victor, Monica, and Daniel. She worked various jobs throughout her life, but she took pride in bartending at the 49’ers bar. She loved the night life and all of the wonderful friends she met throughout the years. She also met her recent husband, Alberto, while bartending. They married in 1985 and together they loved to travel to California and Mexico, attend the Seventh Day Adventist Church, and spend time with their three dogs, Coco, Chiquita, and Bebe. Rosa also loved going dancing, playing pool, frequenting yard sales and thrift stores with her daughters and granddaughters, and spending time with all of her family and friends. She will be deeply missed by everyone who knew her and loved her. She is survived by her husband, Alberto L. Nunez, of Guanajuato, MX; brother Mike Tabayoyon(Betty-Anne) of Yakima;. her children; Louis “Jr” Castaneda (Tricia) of Spanaway, Victor Castaneda of Zillah, Monica Teeters of Wapato, and Daniel Castaneda (Esmeralda) of Yakima, as well as 14 grandchildren and numerous great grandchildren. She is preceded in death by her parents; her daughter Stella Castaneda and her siblings Carmen Wyatt and Richard “Dick” Tabayoyon. Our family would like to give a special thank you to Yakima Valley Farmworkers Clinic, Yakama AAoA, Terri Weijohn of the All Nations Center Adventist Church, Christa Parker at Valley Hills Funeral Home, and all of the others who provided support and care in Rosa’s transition from life to death. In remembrance of Rosa, there will be a memorial held at the Filipino Hall in Wapato Washington on Saturday October 23rd, 2021 from 1pm-4pm

The family of Rosa Dolores Brestar Nunez created this Life Tributes page to make it easy to share your memories.