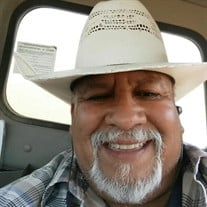 Robert E. Salinas, 63 years old, passed away peacefully at Yakima Valley Memorial on Sunday, March 28, 2021. Robert was born to Biterbo and Filomena Salinas in Toppenish, WA on June 6 of 1957. Robert met the love of his life, Yolanda, while at a dance at the “Puerta Negra” in Toppenish. They married on October 5, 1974. Robert’s love for life centered around his time with his family. His time with them fueled the contagious smile that would light up every room he entered. His family could count on Robert to always be the first one on the dance floor for their many joyous occasions and once he got started, he never failed to become the life of the party. His joyous, happy attitude pervaded his many endeavors and interactions and his joy shined brightly as he watched his grandchildren take the field of athletic play. Robert found and shared joy in the many corners of life, whether it be working in the yard or the garden, building things with his hands, exploring the world of electronic games and puzzles on his iPad or feeling his pulse quicken in response to his beloved Spanish music. He was also as avid and dedicated a fan as his beloved Los Angeles Lakers or Dallas Cowboys could ever ask for. Robert was a dedicated and hardworking man who colleagues and co-workers will remember from his time working Maintenance at the Farm Workers Clinic from 2000-2004, in Toppenish, WA and, as Maintenance Supervisor in Portland, OR. from 2004-2007, as well his seasonal work from 2012-present with Perrault & Sons Farms, in Toppenish, WA. Robert is survived by the love of his life, Yolanda Salinas and their four children, Robert Jr (Alvina), Victoria (the late Bill McCord), Candace, and Jessica (Jon Salme). In addition, he is survived by 10 grandchildren, Bobby, Antonio, Marquice, Xandria, Destyni, Zaylei, Yoaquin, Jayden, Jace, and Kassydi who were his world. Robert is also survived by his loving Salinas siblings, John, Maggie, Anna, Mary, Maricruz, Josie and Guadalupe. He is preceded in death by his parents Biterbo and Filomena and his siblings, Simon, Francisco, Biterbo, Romolo, Martina, Violanda, Jesucita, Paula, and Antonia. Robert’s life building a loving and beautiful legacy through his family will be celebrated with a viewing on 4/8 (Thursday) in Zillah at Valley Hills Funeral Home from 5-7pm and Church services on 4/9 (Friday) in Toppenish at St. Aloysius Catholic Church at 11am.

Robert E. Salinas, 63 years old, passed away peacefully at Yakima Valley Memorial on Sunday, March 28, 2021. Robert was born to Biterbo and Filomena Salinas in Toppenish, WA on June 6 of 1957. Robert met the love of his life, Yolanda, while... View Obituary & Service Information

The family of Robert E Salinas created this Life Tributes page to make it easy to share your memories.

Send flowers to the Salinas family.