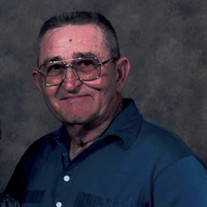 Richard passed away peacefully surrounded by his loving family on Monday, March 22nd, 2021. He was born on August 5th, 1927, to Roland and Georgia Scott. He was raised on a ranch in Brownstown, WA. He attended Mountain View School for first through third grade. His family moved to Medicine Valley and later to the cattle/dairy ranch off of Signal Peak Road, South of White Swan. For the remainder of his schooling, he attended White Swan School District and graduated in 1945. He dated Jeanne Lawrence during his senior year of high school. They were married on May 28th, 1946 in Wapato, WA. They had a loving marriage for 62 years. He and Jeanne raised 5 sons: Pat, Lynn, Dan, Dave, and Joe. Richard and his sons ran the ranch and he also worked at the White Swan Lumber Company as an electrician/Millwright for 22 years. Richard enjoyed hunting and fishing with his friend Owen Kosik. He and Jeanne also enjoyed going to Leavenworth with friends Josie and Frances Shields and Jean and Owen Kosik. Lots of laughter could be heard from the trailer they all stayed in. They sold the farm in White Swan and moved to Harrah. He and Jeanne were strong supporters of the community efforts in the Harrah and White Swan area. He was a volunteer fireman for 13 years and fire chief for White Swan Station 1, District 5 for a couple of years. He was a member of the grange and Lions Club for 40 plus years. Later in life, they moved to Yakima. He and Jeanne enjoyed attending their grandkids and great-grandkids sporting events, recitals, and any other activity they were involved in. Family and friends meant everything to them. Later in life, Richard wanted to be reunited with his wife Jeanne and asked God into his life. He was baptized into the Catholic Church in White Swan. He attended Saint Joseph’s Catholic Church in Yakima. Richard was preceded in death by his parents Roland and Georgia, his brother Bernard, sisters Ruth, Bea, Helen, and Mary, sons Lynn, Dave, and Pat, granddaughter Jenny, daughter-in-law Sharon (Joe). He is survived by sons Dan (Rae) Scott of Pullman and Joe Scott of Yakima, daughters-in-law Lou Scott of Yakima and Cat Scott of Algona, WA, sister-in-law Patty Lawrence (Bob), eight grandchildren and fifteen great-grandchildren, and numerous nieces and nephews. Richard will be missed by many including his Old Town Station friends John and Virgil. Viewing will be held on Thursday, March 25, 2021 at Valley Hills Funeral Home in Zillah, starting at 2-7pm with rosary at 6pm. Graveside Service will be at West Hills Memorial Park in Yakima at 10am on Friday, March 26, 2021. Special thanks to Jeremy and Jessica and family for their loving care! In lieu of flowers, please donate to Hospice Memorial Foundation at 509-576-5794.

Richard passed away peacefully surrounded by his loving family on Monday, March 22nd, 2021. He was born on August 5th, 1927, to Roland and Georgia Scott. He was raised on a ranch in Brownstown, WA. He attended Mountain View School for first... View Obituary & Service Information

The family of Richard William Scott created this Life Tributes page to make it easy to share your memories.

Richard passed away peacefully surrounded by his loving family...

Send flowers to the Scott family.