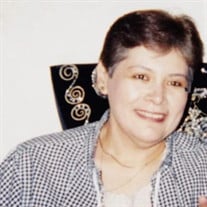 Mary L. Gonzales was welcomed home by her Savior on Thursday, January 28th, 2021. Mary was a kind-hearted soul. Born on August 23rd, 1954 to Lidia M. Gonzales and Tomas B. Gonzales in Toppenish, WA. Her love for the people in her life was bigger than life itself. Mary was an amazing sister, cousin, and friend. She was fun spirited and kind. She was also very protective over her family and loved ones. In her younger years, Mary graduated from Wapato Senior High in 1972. Mary went on and obtained a BA in Social Science, from Central Washington University. She found love in a career in HR at Inland Fruit in Wapato, where she spent her working days. While in this position, Mary met a lot of amazing, kindhearted people, that over time became like family. Mary’s life revolved around her family. She loved being with her brothers, sisters, and cousins. Family parties were one of her favorite things. When Mary was not having fun with her cousins and siblings, she especially enjoyed her time with nieces and nephews. Mary loved taking any chance to shower and spoil them with gifts, her humor, silly stories, and singing. Many of the memories that her nieces and nephews have of her or with her, have to do with cooking and singing. She was always honored to be asked to cook for their special occasions like, quinces, birthdays, or weddings. She was known in the family for her delicious barbacoa and carne con chile. In her later years, Mary looked forward to the youngest of her great nieces and nephews to come visit her and have sleepovers with her. She loved to play games with Dario and Grace and play with toys and cars with Isaac and Matthew. They really kept her spirits up. Mary was a woman of faith. She loved to sing songs to the Lord. Her love for Jesus was undeniable. It was evident in how many of Mary’s family and friends entrusted her to be a Godmother to their children. Mary’s Godchildren were spoiled with love. Mary was honored to be the Godmother (Madrina/Nina) to Juanita Sifuentes, Mona Miranda, Josette Gonzales, Alyssa Visaya, Daniel Martinez, Juan Diego Cruz, and Jesus Alcala. Mary was selfless and always giving of her time when she was able to. She was always wanting to bless those she loved however she could, with her time, cooking, a financial blessing, or a prayer of protection. Mary will be dearly missed by her family that she has left behind: brothers, Roger (Laura) Gonzales, Jesse Gonzales. Sisters, Anne (Jesse) Farias, Sonia, and Rosa Gonzales. Her nieces and nephews, Linda Strom, Terri, and Willie Gonzales, Aubrilynn and Andrew Gonzalez. Blanca, Andres, Cynthia Herrera. Laurie and Lorenzo Gonzales. Pat, Chewy, and Lucy Farias. Erica Gonzales, Alyssa, and Anthony Visaya. Rhiannon Gonzales, Dario, and Isaac Davila. Rochelle, Austin, Matthew, Joseph Cleem and Grace Klutts. Josette and Tomas Gonzales. Her sisters in-law, Sally Garcia, Lucy Urbina, and Mona Miranda. Her best friends who became her sisters, Marcella “Chella” Garcia, Martha Garcia, and Robyn Harris. Along with all her cousins, who are near and far, that were kept in a special place in her heart. She was reunited in her passing with her mother and father, Lidia and Tomas Gonzales, sister, Josefina “Peppa” Herrera, her brother, Willie (Cathy) Gonzalez, Robert “TR” Gonzales, Joey Gonzales, and Goddaughter Jasmine Milagro Cruz. The family will have a Celebration of Life to honor Mary for her birthday in August. More details to come.

Mary L. Gonzales was welcomed home by her Savior on Thursday, January 28th, 2021. Mary was a kind-hearted soul. Born on August 23rd, 1954 to Lidia M. Gonzales and Tomas B. Gonzales in Toppenish, WA. Her love for the people in her life was bigger... View Obituary & Service Information

The family of Mary L Gonzales created this Life Tributes page to make it easy to share your memories.

Mary L. Gonzales was welcomed home by her Savior on Thursday,...

Send flowers to the Gonzales family.