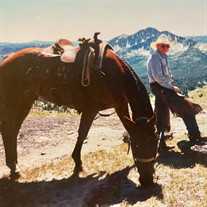 Lawrence (Larry) Hallman passed away peacefully on October 15, 2021, at the Prestige Care Center in Sunnyside, Wa. He had fractured his hip, had surgery and was doing rehab. He would have been 95 in December. Dad was born on December 7, 1926, in Avon, South Dakota to William and Nellie Hallman. We never forgot his birthday as it was “Pearl Harbor Day”. Some of his early memories were of the snow reaching the roof of their house and also how his brother, Billy, would race the Indians on horseback going to school. Dad’s parents came from Missouri in a pickup truck with 5 children in 1937. Dad and Clancy rode in the back as well as Dads german shepherd dog, King. They settled on Beaudry Rd in Moxee, when he was 11 yrs old. At age 15, Dad bought his first horse for $55.00 and called him Snorty. He had to ride him all the way back from Toppenish and didn’t get home til 2 in the morning. His first job was working in the hop fields tyeing them, all while riding a horse. Later on he was promoted to firing the wood to dry the hops. He joined the Navy in 1945 and served on the USS Pioneer minesweeper as a Radioman 3rd Class. When he came back to Moxee, he married Lillian Morford and they were married 41 years, and had 3 children. They started their life in Moxee buying a place across from his parents. Eventually they settled in Grandview on a farm on Griffen Road, painting the barns and fences red and white and planting asparagus, hay, grapes and raising cattle. In 1977 he purchased 20 acres in Painted Hills, built a home, and developed lots for homes. Dad always took us on a vacation, camping and fishing. He always had a pool table and a juke box full of country songs. He loved his horses, the mountains, camping, fishing, hunting, remodeling, and playing pinochle. All the while, He also worked as a truck driver for Pepsi, Eddys Bread, and Snyder’s Bread, retiring at the young age of 55. And then his fun began, no more getting up at 3 in the morning! They bought a 5th wheel and made several trips to Arizona in the winter. He married Marilu Peterson on July 23, 1991, on horseback in front of 100 other riders, in Joseph, Oregon . They moved to Moxee . They both loved riding horses and had many trips to the mountains with the Back Country Horseman for over 25 years, also taking their dog, Shay. Everyone wanted Dad to be the guide as he knew those mountains. He took many of his siblings, children and grandchildren on horse rides. Go rest high on that mountain Cowboy! Lawrence is survived by three children: Bill (Linda) Hallman of LaGrande, Oregon, Vicki Kissler (Mike Kendall) of Prosser, WA, and Steve (Sharon) Hallman of Prosser, WA. Sisters, Linda (Bill) Werst of Prosser, Martha (Ken) Quakkelaar of Evansville, IN, Maxine (Dave) Ballinger of Sunnyside, and brothers, Clarence Hallman, Pasco, Gene (Jan)Hallman of Richland. Stepsons, Jason (Kristi) Kevan, and Jim Kevan. Grandchildren, Jeff (Angel) Hallman, Travis Hallman, Jamie (Erik)Snyder, Kendra Forbes, Matt (Rachel) Kissler, Brandi (Heath) Cleveringa, Stephanie (Shayne) Toliver, and eight great grandchildren, and one great great grandchild. He was preceded in death by his wife, Marilu, in September 2020, parents, William and Nellie Hallman, brother Billy Hallman, and sister Delores Louckes. A family viewing at 10:00 a.m. will be at the Valley Hills Funeral Home at 607 2nd Avenue, Zillah, WA and the Celebration of Life will follow at noon on Saturday, October 23, 2021 at the Bethany Community Church, 206 Birch Ave, Grandview WA. A lunch will be served afterwards.

Lawrence (Larry) Hallman passed away peacefully on October 15, 2021, at the Prestige Care Center in Sunnyside, Wa. He had fractured his hip, had surgery and was doing rehab. He would have been 95 in December. Dad was born on December 7, 1926,... View Obituary & Service Information

The family of Lawrence Hallman created this Life Tributes page to make it easy to share your memories.

Send flowers to the Hallman family.