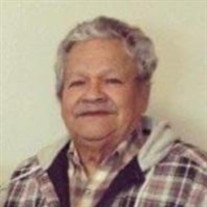 Our beloved husband, father, grandfather, brother, uncle and friend Jose Cruz Roman Jr., passed away at the age of 84, on Wednesday, May 19, 2021 at his home with his family by his side. Jose was born to Jose Cruz Roman Contreras Sr. and Petra Roman (Castillo) on April 17, 1937 in Saltillo, Coahuila, Mexico. He met the love of his life, his “Amor”, Andrea Deleon in 1952. He migrated with his fiancé Andrea in 1954 from Mexico to Edinburg, Texas and later were married on April 2, 1957. Together they raised four children Alfredo “Fred”, Maria “Toni”, Andres “Andy” and Michael “Miguelito”. They moved around as migrant workers with their family and eventually planting their roots in Sunnyside, WA where they built their forever home. Jose was great at many things. In his younger years he was a boxer, barber and a handy man. He was the jack of all trades. He taught himself to be a welder, plumber, construction worker, electrician and mechanic. Jose was a thoughtful and caring person. He would give the shirt off his back for anyone who needed a helping hand, whether you were related or not. Jose was known in the community as “Shorty”. He was a devoted lifetime member of the Saint Joseph Catholic Church in Sunnyside, WA. His handyman work led him to help reconstruct rooms in the convent for the nuns. Jose’s hobbies included taking his wife to the casino, buying scratch tickets and hanging out at the laundromat with his friends. He especially looked forward to spending time with his family for brunch on Sundays and sharing his stories and advice. He loved having a full house and all the noise that came with it. He will be deeply missed. Jose is survived by his beloved wife, Andrea Roman, daughter Maria Canales (Francisco), son Andres Roman and son Michael Roman (Jenny). Grandchildren Christina Gonzalez (Eliseo), Isabel Wood (Steven), Connie Canales-Garcia (Christopher), Frank Canales Jr., Ezekiel Canales (Mia), Vanessa Roman, Josie Roman, Freddie Roman, Michael Roman Jr. and Clarissa Roman. Eleven great-grandchildren Ulyses, Alexander, D’Angelo, Alianna, Nathaniel, Noah, Elijah, Cheri, Jeremiah, Zaiden and Jameson. He is also survived by his sisters Ramona Gonzalez, Angelita Pena and Petra Rocha (Mario). Brothers Joe Roman and Ruben Roman and numerous cousins, nieces and nephews. Jose is preceded in death by his parents, his son Alfredo Roman, siblings Francisco Roman, Juan Roman, Maria de la Paz Rodriguez, Manuela Rodriguez and Guadalupe Sosa. Viewing and visitation will be held on Thursday, May 27, 2021 from 4:00-8:00 PM with recitation of the Holy Rosary at 6:00 PM at the Valley Hills Funeral Home in Sunnyside, WA. A Mass of Christian Burial will be held on Friday, May 28, 2021 at 10:00 AM in the St. Joseph Catholic Church in Sunnyside, WA. with burial to follow at Lower Valley Memorial Gardens, Sunnyside, WA.

Our beloved husband, father, grandfather, brother, uncle and friend Jose Cruz Roman Jr., passed away at the age of 84, on Wednesday, May 19, 2021 at his home with his family by his side. Jose was born to Jose Cruz Roman Contreras Sr. and Petra... View Obituary & Service Information

The family of Jose Cruz Roman Jr. created this Life Tributes page to make it easy to share your memories.

Send flowers to the Roman family.