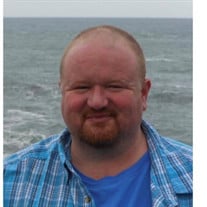 On March 26th, 2021, Jamie Stevens unexpectedly passed away at the age of 47, leaving behind family and friends that miss him dearly. Jamie was born March 19th, 1974, in Yakima, Washington. He grew up in Tieton, Washington where he led a childhood full of family and friends that he kept close until his death. As a boy, he was an active Boy Scout, spending many happy moments camping and exploring the mountains with the troop. He held on to that love and continued to enjoy the great outdoors every chance he got. Jamie loved bird hunting, fishing, and mushroom hunting. In his young adult years, Jamie could be found entertaining crowds by singing karaoke at the local Naches bars with family and friends. Jamie graduated from Highland High School in 1992, going on to earn his AA in accounting. Jamie had an incredibly kind heart, connecting with people on a different level than most. Anywhere he went in his life, he made strong lasting friendships. He was also an amazing friend who checked in on anyone he knew that was struggling. Indeed, many family members and friends regularly received messages just to see how they were doing. Once he discovered the internet, Jamie began connecting with people across the country as well, again making friends along the way. Jamie had a gift for telling stories and capturing the attention of anyone listening. He had an endearing way of weaving tales and leaving everyone in fits of laughter. Jamie loved to drive and enjoyed scenic trips across the country. Every year he took a road trip with his aunt to Arkansas to visit family and just get away. Even while away, he loved keeping in touch with everyone. Jamie will be missed by the many whose lives he touched. Jamie Stevens is predeceased by his parents James and Dorene, and nephew Kai. He is survived by his brother Joey (Jessica), and his niece and nephews, Malorie, Luke and Ashton. He leaves behind many uncles, aunts and cousins that were very close to him. He will be remembered and missed by the numerous people who have chatted with him, laughed with him and reminisced on old times. There will be a celebration of life held on Saturday, April 10, 2021 at 10:00 am at Valley Hills Funeral Home, 2600 Business Lane, Yakima (Terrace Heights), WA, 98901.

On March 26th, 2021, Jamie Stevens unexpectedly passed away at the age of 47, leaving behind family and friends that miss him dearly. Jamie was born March 19th, 1974, in Yakima, Washington. He grew up in Tieton, Washington where he led a childhood... View Obituary & Service Information

The family of Jamie Joe Stevens created this Life Tributes page to make it easy to share your memories.

Send flowers to the Stevens family.