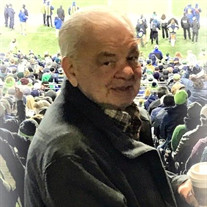 James L. Smith James (Jim) Smith of Yakima, WA. passed away February 8, 2022. Born January 11, 1940 in Sunnyside, WA. He married Janice A.E. McLaughlin March 17, 1963. Janice preceded him in death, passing March 2018. He is survived by two daughters, Denise Smith of Bellevue, WA., Ranee Andrews of Naches, WA., married to Dan Andrews, three grandchildren Bailey, Camden, and Blake Andrews. Two brothers Bob Smith and Jerry Smith. Three siblings preceded him in death, George Smith, Don Smith, and Loretta Sherwood. His parents Claire and Dorothy Smith also preceded him in death. Jim was a loving husband, father, grandfather, brother, and friend. With a kind smile, sometimes full of mischief and a heart full of kindness and love. Jim spent most of his life in the Yakima Valley. Graduating from Sunnyside Highschool in 1958. He loved to duck hunt, fish, golf and enjoy all the fresh fruits and vegetables the valley offered. After Highschool he joined the Navy for four years and was stationed in San Diego CA., Monterey, CA. and Memphis, Tennessee. Monterey and Carmel became two of his favorite spots and he visited many times over the years, taking in 17-mile drive. Jim loved his family deeply, always there for them. His grandchildren brought him such joy, he loved to play with them, watch them play sports and grow into young adults. Jim along with Jan loved going for drives, antiquing, visiting little casinos, playing pinochle and spending time with family. Jim was a Seahawk and Mariner fan- he truly enjoyed going to Seattle for the games. He loved to watch all sports, but football and golf were his two favorites. Jim loved to work in the yard, every spring he would get it ready for summer and enjoy it throughout the seasons. Josie his golden doodle, he loved deeply and took her everywhere he could, daily drives along with hitting the local Starbucks – where they knew both him and Josie by name. Jim and Janice owned several businesses including Slims Market in Naches, WA. before retirement. In Naches for over 30 years, they were involved in and supporters of the community. Jim was an active member of the Naches Fire Dept. from 1986-2000, the last several years there he served as the Fire Chief. He had such a passion for the station and the members. Also, a member of Naches Lions, Naches Park Association and Upper Valley Sports. About seven years ago they moved to Yakima, WA. where they truly enjoyed their retirement. Jim had many friends, as he always had a smile for everyone – and never forgot a name. An incredible storyteller who could recall events clearly from his childhood. Jim shared his love, smiles and support with all he met. He is now sitting with Janice laughing, catching up and watching over all of us. We were truly blessed that he was our father, grandfather, brother, and friend. Celebration of Life for Jim will be held Saturday March 5th, 2pm at the Harman Center in Yakima. If you would like to make a donation in remembrance of Jim, please donate to Naches Fire Dept, where he was the chief for many years.

The family of James Leroy Smith created this Life Tributes page to make it easy to share your memories.

Send flowers to the Smith family.