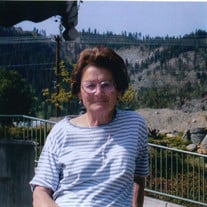 Elizabeth “Betty” L. (Braman) Williams Elizabeth “Betty” L. (Braman) Williams of Selah, Washington, went home to the arms of our Lord, Jesus Christ on February 27, 2021 with her family by her side. Betty was born to George and Loretta (Lauer) Braman in St. Cloud, Minnesota on April 24, 1932. Her family moved to Washington to work in the shipyards during World War II. After the war they moved to Portland, Oregon and Betty graduated from Roosevelt High School. Betty worked as a nurse at Mary Bridge Children’s Hospital while she was raising her two boys, Bob and Ken. When she married Rodger Williams in 1973, she also gained a daughter, Lynette. Rodger and Betty would celebrate 48 years of marriage on March 16, 2021. Betty was very active and loved being outdoors, whether she was hiking in the Cascades, traveling to the beaches of Washington and Oregon, hunting sun stones in the high deserts of Oregon or looking for sapphires in Montana. She loved fishing with her son and husband on the Cowlitz and Toutle rivers and loved clam digging at the beach. She was a member of the Yakima Prospecting Association where she enjoyed taking care of the monthly raffle. She would spend hours at the gold shows every year shopping for raffle items. She looked forward to all the club events, which included yearly mine tours and potlucks up at Pat and Christy McKeown’s mine. She and Rodger took numerous drives up Blewett Pass to buy “gold dirt” from Rob Repin. She also loved her Sunday drives up the Ellensburg Canyon looking for animals. Betty will be remembered for her love of all animals. She was a member of the Southwest Washington Llama Association, Washington State Quarter Horse Association and contributed to Best Friends Animal Society (where she and Rodger spent time working), ASPCA, Yakima Humane Society, United States Humane Society and PAWS. During her lifetime she had numerous animals including her horse “Star,” her llamas and all her cats. She loved each and every one. She and Rodger would also trap feral cats, have them neutered or spayed, then make sure they were all fed. She was relentless in her efforts to make sure all animals were spayed and neutered. Betty is survived by her husband of 48 years, Rodger Williams. She is also survived by her two sons, Robert Hunter (Linda), and Kenneth Hunter (Iara Raley), and her daughter Lynette Koepp (Bryan); grandchildren Ian Hunter, Peyton Hunter, Jami Battiato (Joseph) and ChyAnn Koepp (Nestor Dumloa); and great-grandchildren Brody, Lucas, Cooper and Bennett. She was preceded in death by her mother, father, and her brother, Melvin Braman. There will be a graveside service for Betty on March 12, 2021, at 11:00 a.m. at Tahoma National Cemetery in Kent, WA. There will be a Celebration of Life at Central Assembly of God, where Betty attended church since 1991, on March 13, 2021, at 2:30 p.m. “Babe, I will see you on the other side.”

The family of Elizabeth Louise Williams created this Life Tributes page to make it easy to share your memories.

Send flowers to the Williams family.