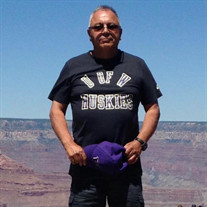 Daniel Ramos April 25, 1953 - November 8, 2021 Zillah, Washington - Daniel "Danny Boy" Ramos passed away on November 8, 2021, at the age of 68. He was born and raised in Toppenish, WA to father Ausencion “Chon” Ramos and Sarah Ramos. Daniel was one of seven children who enjoyed their upbringing in Toppenish. Daniel graduated from Toppenish High school in 1972. Soon after he took an apprenticeship with IBEW Local 112. He soon after became an electrician at the Hanford Nuclear Reservation where he worked and molded life-long relationships for over 38 years. He was a community ambassador for the local youth and coached several youth sports for his children and their peers. He will be remembered by all that he had the privilege to know him as a gentle natured, lighthearted, servant of the Lord. Daniel was married to his high school sweetheart Ramona Ramos on March 25, 1972 who survives him. He is also survived by his siblings Lucy (Ruben) of Richland, WA, Gene (Barb) of Yakima, WA, Delores of Sunnyside, WA, and Ernie (Norma) of Toppenish, WA. his daughters, Sonia Ruggles (Curt) of Zillah, WA, Christella Gunnyon (Coyote) of Zillah, WA and son, Jason Ramos (Sumaira) of Lynnwood, WA as well as 12 grandchildren and 1 great-grandchild, and numerous nieces and nephews. He was preceded in death by his parents as well as his brothers George Ramos and Richard Ramos. Daniel was a member of the Toppenish Hope for the Nations Church since 1993 where his faith in God flourished year after year. He was an avid hot rod enthusiast where at a young age he began to drag race at the local Renegade Raceway. He was an active member of the “Iron Angles” car club and cherished the cruises, car shows, community activism, and comradery. A service will be held at 1:00 pm on Friday, November 12, 2021 at Valley Hills Funeral Home, 531 S. 16th St. Sunnyside, WA with a graveside service following at 3:00 pm at The Zillah Cemetery located at 100 First Avenue, Zillah, WA. *The family asks that in observance of Washington COVID-19 ordinances please wear masks, maintain social distancing policies, and refrain from attending if you are experiencing COVID-like symptoms.

The family of Daniel Ramos created this Life Tributes page to make it easy to share your memories.

Send flowers to the Ramos family.