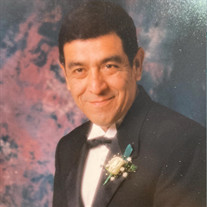 Born November 3rd, 1949 in Sunnyside, WA Charlie Hernandez passed away peacefully at The Cottage in the Meadow in Yakima, WA with his best friend and daughter by his side. He was a dedicated father, grandfather, best friend, brother and son. He loved his two grandsons with all his heart. Charlie helped run the family hop ranch in Mabton, WA, working alongside his dad and brothers for numerous years. Upon high school graduation he attended Perry Tech, studying auto body. It was during these years that he loved playing guitar and singing in a band with friends. Charlie met his best friend, Delia in 1971 when she showed up with her father to work on the Hernandez Hop Ranch. They were married in January 1972 through 1992, and although the marriage ended, they remained the best of friends. They would watch westerns together, work on his hobby farm, grow a garden every summer, and were each other’s best drinking Buddy. They started their family in Mabton, welcoming a baby girl in 1973, who would become his pride and joy. Charlie had multiple careers, working as the pressman at Daily News, a farm supervisor for Beach Kupp Farms, ran ABC Rental, operated his own locksmith business, and lastly, he began Charlie’s Building Services in 1991, which he operated until the very end. This company would become his passion. It was through this business that he accomplished many things, including helping to build out the Mid Valley Mall, construct the building from the ground up that houses Big 5, the WorkSource building in Sunnyside, the Building that houses Bank of the West/Radio Shack… and so many other projects over the years. Through this business he also operated the Mid Valley Mall as Facilities Manager. for Dr. Davis with the Northwest Land Company in 1991 and finally for The Carrington Company from 1993 to the present. This would be the place that he would use to teach his grandsons a strong work ethic and the value of money by having them work by his side during the summers. He loved watching westerns, reading his daily newspaper, drinking his Michelob beer, watching NASCAR, spoiling his grandsons and loved a good ribeye on the grill. Survived by his best friend Delia Hernandez, his daughter Audrey Brandsma (Jeremy), grandsons Andrew Brandsma, Austin Brandsma (Diane Chavez), Brothers Gilbert Hernandez, Fred Hernandez (Gigi), Jesse Hernandez Jr (Maria), Richard Hernandez; Sisters Christina Moreno (Thomás), Rachel Ott (Ken), Maria Bice (Del), and numerous nieces and nephews. He is preceded in death by his grandparents, Father Jesse Hernandez Sr., Mother Hortensia Hernandez, sister Norma Hernandez and brother Eduardo Hernandez.

Born November 3rd, 1949 in Sunnyside, WA Charlie Hernandez passed away peacefully at The Cottage in the Meadow in Yakima, WA with his best friend and daughter by his side. He was a dedicated father, grandfather, best friend, brother and son.... View Obituary & Service Information

The family of Charlie Hernandez created this Life Tributes page to make it easy to share your memories.

Send flowers to the Hernandez family.