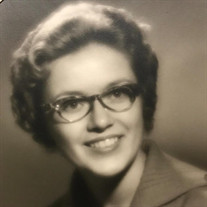 Barbara Jean Eakman Spencer passed away February 14, 2021. She was born in Yakima on January 27, 1942 to Robert and Donna (McCain) Berghoff. Barbara’s maternal grandmother, Nellie McCain, and Aunts Bessie (Cook Sines) and Faye (Dunsmore) played important roles throughout her life, helping to raise Barbara after her parent’s divorce. Barbara was married to Grover Eakman from 1960 to 2002 and together they raised three children in Yakima and Wenatchee. She worked for many years at the fine jewelry counter at JCPenney, retiring after 20 years of service. Barbara married Larry Spencer in 2003. They loved spending time with family and friends. She actively supported Larry’s many leadership roles within the Yakima Elks and they enjoyed traveling to many of the western states attending Elks gatherings and conferences, connecting with friends around the country. Barbara was devoted to her family. She loved her kids unconditionally and she was their greatest champion. Barbara was happiest when at one of our many large extended family gatherings cooking, eating, telling stories, and playing games. She had a smile that lit the room, and her warmth, laughter, and love are greatly missed. Barbara is survived by husband Larry, son Jeff (Donna) Eakman, daughter Lori Eakman, and daughters Susie (Bill) Dalton, Cindy (Tom) Gower, and Becky Spencer (Rich Farley), brother Bob Berghoff, and a close and loving group of cousins, nieces, nephews, grandchildren (8), and great grandchildren (3). She was preceded in death by her parents and son Brad. A memorial service is planned for late summer.

The family of Barbara J Eakman-Spencer created this Life Tributes page to make it easy to share your memories.

Send flowers to the Eakman-Spencer family.