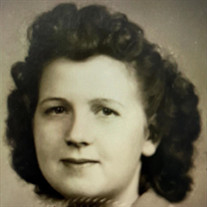 Anna Gurine Sullivan passed away on Monday, January 3, 2022 at the age of 98. Anna was born on May 21, 1923 at Beskeland, Roën, Norway to Nils and Marie (Storvik) Hansen. Marie and the children, none of whom spoke English, emigrated to the United States in March, 1924, disembarking at Ellis Island. Nils had emigrated earlier and was working as a logger in Michigan to earn money for their transit. Marie and the children traveled by train to Salem, Oregon where Nils had rented a house for them. Nils rejoined the family and over the next year, with the help of his sons, built a house nearby, which became the family home. Anna attended Englewood Elementary, Parrish Junior High, and Salem High School where she graduated in 1941, after becoming a naturalized citizen in 1937. She then attended the Oregon College of Education at Monmouth, Oregon. Following her graduation from college, Anna commenced her long career in public education, teaching at elementary schools in Oregon, Washington, and California from 1944 to 1952. While teaching in Klamath Falls, she took square dance lessons to add to her abilities in teaching physical activities to her students. It was during these lessons that Anna met Ed Sullivan, who was a student at Oregon Technical Institute. They got engaged soon afterward, and Ed was recalled to the Navy. They were married on April 11, 1951, while Ed was on leave from the Navy during the Korean Conflict. In 1953, Anna and Ed moved into a two-room cabin Ed had built on his family’s holdings outside of Ellensburg on Manastash Road. They lived in the cabin until Ed completed the family home in 1955. During this time, Anna and Ed started a family that would, ultimately, include four children. In 1965, when her youngest started school, Anna went back to college at Central Washington College of Education to renew her teaching license and earn a Masters degree in Special Education. She then went back to the classroom, teaching Special Education in Ellensburg until 1969, 5th grade at Garfield, Washington until 1979, and Special Education in Nulato, Alaska until her retirement in 1983. Anna had a life-long love of reading, which she passed on to her children. She was a member of the Women’s Volunteer Fire Brigade and active in Rebekahs, Eastern Star, Manastash and Pomona Granges, and Baptist/Christian churches. She was also quite involved in local community efforts, including being a volunteer in the Adult Literacy Program and the Retired Senior Volunteer Program. Anna was preceded in death by her parents, her brothers Oscar Brevaka (Norway), Wilhem (Bill) Hansen, and Ingvard Hansen, and her sisters Karla Kvamme (Norway), Gertrude Jones, Nellie Smith, Marna Swinson, Harda Spires, and Selma Nickoli. She is survived by her four children, Beth Mills, and Lars (Elzelien), Ole (Nate), and Allen Sullivan, six grandchildren, and three great grandchildren. Anna was a loving spouse, a wonderful mother, a passionate teacher, and a kind, patient, forgiving, and compassionate soul. A private graveside service will be held for the immediate family members, with a memorial celebration later in the year when weather improves.

Anna Gurine Sullivan passed away on Monday, January 3, 2022 at the age of 98. Anna was born on May 21, 1923 at Beskeland, Roën, Norway to Nils and Marie (Storvik) Hansen. Marie and the children, none of whom spoke English, emigrated to the... View Obituary & Service Information

The family of Anna G Sullivan created this Life Tributes page to make it easy to share your memories.

Send flowers to the Sullivan family.