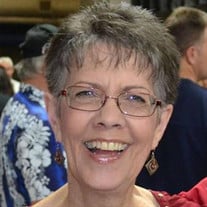 Mary Kathleen Alstead Carlton, age 72, precious mom, grandma, sister, aunt and friend, passed suddenly and unexpectedly into the arms of Jesus on March 23, 2022 in Yakima. As she ascended to heaven and to all those waiting to greet her, it is certain she exclaimed “Hot Dog!” to hear exciting news from those who knew and loved her. Mary was born the youngest of three daughters to Pat and Karl Alstead on May 29, 1949 in Juneau, Alaska, where she was raised and came to embrace her Norwegian heritage. After graduating from Juneau-Dougals High School in 1967 and traveling to the family farm in Norway, Mary attended Olympic College and Western Washington State University in Washington. She then returned to Juneau to work at Alaska’s Office of the Governor before moving to Anchorage, AK, as secretary for the Public Relations Department at the Alyeska Pipeline Service Company. In 1975 Mary moved to Seattle and joined Scott Paper Company where she met Bob Carlton. They married, and Mary began her next chapter in Yakima, WA, as wife to Bob, instant mom to his three teens and church secretary for Westpark United Methodist Church until 1985. Mary became secretary of Wesley United Methodist in 1994 where she developed two of her most cherished lifetime friendships with Peggy Phillips and Danene Knudsen. In 2004 Mary became campaign assistant for fundraising at Memorial Foundation, a job she loved dearly, and her niche of organization and generosity melded perfectly. Bob retired from Scott Paper Company in 1993 as grandchildren began to steadily arrive and who became the couple’s treasured focus. They also loved traveling and split the year between their homes in Yakima and Yuma, AZ, for many years with their adored and slightly spoiled yorkies, Teddy and Rudy in tow. Mary took her many “hobbies” to an expert skill level with an artist’s eye and attention to detail. She loved to sew, bead, weave and make wreaths for every holiday or simply to adorn every room in her home. She was an avid reader and said she developed the “acquired skill” of napping at the same time. Mary also loved old movies and passed that love on to her kids and grandkids. It’s A Wonderful Life and White Christmas will forever be a family Christmas tradition In 2015 her beloved husband Bob suffered a massive stroke. In his recovery Mary never left his side as she diligently and deeply cared for him. After Bob’s passing in 2016 after 42 years together, Mary poured herself into those she loved. She always found any way she could to bless others. She kept in regular touch with friends and joined monthly Zoom meetings with her two adored sisters, Margie and Karleen, who loved their quick and smart younger sister’s bright spirit, ready smile and sense of humor. Most of all she will be remembered as a treasured grandma with ready advice, encouragement, her empathetic compassionate attitude and an excitement in her beautiful voice at the sound of theirs and a prayer on the ready. As an “instant mom" she was assigned a mountainous task all those years ago, and the family’s lives and character were forever changed for the better. Matthew 25:23: His lord said to him, “Well done, good and faithful servant; you have been faithful over a few things, I will make you ruler over many things. Enter into the joy of your Lord.” Mary is proceeded in death by her husband Bob Carlton, son Shawn Carlton and sister-in-law Joyce Matthews. She is survived by her children Flint R Carlton and wife Amy, Kristi M. Messer and husband Brian (Mary’s protector, biggest hugger, coffee regular and handyman); grandchildren Lindsay Steinke and husband David, Hannah Mills and husband Nick, Hayden Messer, Jace Messer and fiancé Byanka Equihua, Halle Messer and fiancé Dakota Borchardt and Grayson Messer; great-grandchildren Weston and Grant Steinke and Jackson Mills; sisters Margie Shakelford and Karleen Grummett and brother-in-law Roger Grummett; nieces Stacy Grummett Sedgwick and Gina Shackelford Garnett; nephews John Grummett and David Shackelford; cousins Bonnie Carter and Janet Schwartz; and her Alaska cousins, one of whom was very special, Lorraine Boyden now of Austin, TX. A gathering for celebrating Mary’s life will be held at a later date. Donations may be made in Mary’s memory and sent to Joyce Meyer Ministries at www.joycemeyer.org/donate. The family can be contacted at [email protected]

Mary Kathleen Alstead Carlton, age 72, precious mom, grandma, sister, aunt and friend, passed suddenly and unexpectedly into the arms of Jesus on March 23, 2022 in Yakima. As she ascended to heaven and to all those waiting to greet her, it is... View Obituary & Service Information

The family of Mary Kathleen Alstead Carlton created this Life Tributes page to make it easy to share your memories.