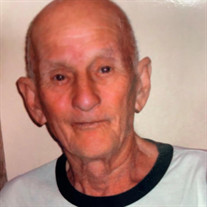 William Vaughn Mandrell August 20, 1933 - May 20,2021 William Vaughn Mandrell, 87 of Sunnyside, passed away peacefully on May 20, 2021, at Cottage in the meadow in Yakima, WA. He was born August 20, 1933 in Mountain View, Oklahoma, to William Clyde Mandrell and Maud Lee “Jaunita” Leslie Mandrell. William married the love of his life Pauline Mary Brown of Toppenish August 27, 1955. William and Pauline were married for 59 years. After the passing of his beloved wife, Bill lived the rest of his years comfortably at his daughter Chris and Joe Wentz’s in Zillah. In a family full of William’s, he was known by many names: Dad, grandpa, grandad, The Old Man, Vaughn, Bud, and Coyote Bill. Bill was a hard-working and supporting father. He had many talents and was always busy. He built several homes and garages and remodeled homes as well. He was a great gardener as well as a hunter, trapper, and so much more. He loved sharing his expertise with everyone. Bill enjoyed life to the fullest and was very proud of his Chickasaw heritage. Coyote Bill kept busy from fall to winter with his daily hunts. There were very few times he came home empty-handed. Bill would hang, skin, and stretch his “dogs” coyotes. When his eyesight started to fade, his young friends would stop by with their kills and learn from him his skills with a rope and knife. He looked forward to his end-of-the-season pizza party he would throw for his hunting friends, with the money from selling the pelts. Every family has at least one of his homemade corn cob back scratchers, as well as his goose and apple gourds he grew and painted. You can find his gourds that he shared with everyone that he knew up and down the valley. Grandpa would take all the kids on arrowhead, agate, and metal detecting hunts to see what we could find. He had a huge coin collection that he liked showing off and telling us about. If there was music, he was dancing! Grandpa made sure all the kids knew how to two-step with him. You can bet if you see a dam anywhere in the northwest, he probably helped build it. He enjoyed his years working at Hanford, as well as the many friends he made there and kept. Bill was a proud local 348 Union member. Bill made it to every Union Christmas party and loved taking his kids, grandkids, and great-grandkids along to enjoy the fun. He will be missed by everyone he knew and loved. So save some hunts for the rest of us; take it two steps forward and 1 step back. He is survived by his three daughters Rosaline(Jim) Nesmith of White Swan, Chris (Joe) Wentz and Evelyn (Rick) Murray, both of Zillah; one son Bill (Gloria) Mandrell Jr. of Sunnyside; two sisters; Flora sue James,(Nora Ann Mandrell Mayer). Eight grandchildren Tana, Trina, Renee, Rick, Bill, Holli, Kari, and Wayne; twelve great-grandchildren, Trisha, Dakota, J.R., Chance, Conrad, Wyatt, Kendra, Kelsey, Kaylee, Tyler, Brody, and Brandy; and four great-great-grandchildren, Derikk, Devin, Dezirae, and Harper. William is preceded in death by his loving wife Pauline; his parents; one sister Loretta Jaunita Swink; and one great-granddaughter, Lilly Rose Garcia. A special thanks to P.C.M. Heartlinks, Cottage in the meadow. At this time, there will be no service.

The family of William Vaughn Mandrell created this Life Tributes page to make it easy to share your memories.

Send flowers to the Mandrell family.