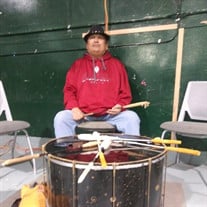 Wilburn Louis Hill, “Kukya” born December 22, 1960 to Joe and Helen Miller Hill. Wilburn explained to his family, “I came into this world on a cold snowy day and I will leave this world on a cold snowy day.” February 18, 2021, Wilburn went peacefully home to the Creator on such a day he spoke of, “cold and snow.” He was the fourth born out of ten siblings. Kukya coming from the Klinquit band, was an enrolled Yakama member and proud descendant of the Muscogee Creek Nation. Growing up in both Oklahoma and Wapato, WA he attained his education in both states. He attended the Haskell Indian Junior College and earned his AA degree from Yakima Valley Community College. Wilburn excelled in football as a linebacker and running back. He proudly played for Wapato Jr High, Wapato Sr High, Claremore High School and Seminole High School football teams where he earned his nickname “Willie white shoes.” In his younger years Willie enjoyed sponsoring basketball tournaments and coaching teams. “All Tribes” basketball team proudly won trophies and are still on display at the church to this day. Traveling to pow-wows to sing and drum with the Yakama Drum group brought him great joy and fulfillment in his life. As a devoted supporter of all his nephews and nieces he could be counted on to attend all school, sporting, boxing and pow-wow endeavors. If it was a special event he dressed up “Uncle Willie style” From all the nieces and nephews, “Thank you for always being a man we could depend on.” Wilburn held many positions in his lifetime. He worked for the Heritage Inn Restaurant, Yakima Crisis Residential Center, Yakama Nation Youth Treatment Center, Yakama Forest Products, helped open the Yakama Nation Legends Casino where he was a blackjack/roulette dealer. Being quite the character, he was known for his humor and ability to tell very detailed stories. Nephew Albert Squeochs said, “he was the funniest uncle to exist.” He joked about his babes Summer Newman and Maggie Eaglebear, professing his love for the two. Willie was also an avid Oklahoma Sooners football, Seattle Seahawks fan and Wapato Wolves. His ultimate past-time was going to the Casino and playing machines. Lastly, he was known for all the different hats he wore. Wilburn in survived by his son Phillip Tyrone Hill, grandson Alford Waldron III (Alejandra Garcia). Two sisters, Sharon Jo Hill of Wapato, Espoke (Stuart) Jim of Wapato. Aunts Phylliss Littlebull, Rosemary Miller. Uncles Harry (Jeanne) Smiskin, Stanley Miller, Melvin (Mary) Miller all of Wapato. Numerous nephews and nieces who were all special to him. He is preceded in death by his parents Joe and Helen Miller Hill, daughter Melinda Marie Hunt, maternal grandparents Tony and Hazel Smiskin Miller, paternal grandparents Tony and Margret Hill. Respected elders, Smiskin Sohappy, Chief Jobe Charley, Julia Stigen John, David Miller, Sr. and Bessie Miller. Sisters Chumila Hill, Hazel Hill, Madeline Hill. Brothers David Hill, Phillip Hill, Vernon Hill, and Joe Hill Jr. Granddaughters Samantha Hill, Tana Hill. Aunts Jeanette Wesley Smartlowit, Marilyn Miller Selam, Nadine Miller Ike, Leanne Miller Umtuch, and Naomi Miller Rivas. Uncles Orrin Miller Sr and Robert Miller. The Hill family would like to thank the DaVita nursing staff, Dr Licht and nurse Summer. Also, we would like to thank the home health care nursing staff Kelly Walker and Dan because they never failed to answer calls when needed, Memorial wound care staff. We would also like to recognize Dr. Quempts from the Indian Health Service, CHR staff and lastly the Pahto bus drivers. We can only imagine how beautiful the reunion Willie is having in Heaven with all his family who have gone on before him. Fly high Willie! Dressing service will be held Saturday, February 20, 9:00a.m., at the Wapato Longhouse with the burial to follow at the Union Gap Cemetery.

The family of Wilburn L Hill created this Life Tributes page to make it easy to share your memories.

Send flowers to the Hill family.