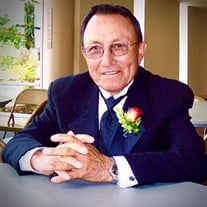 Walter (Walt) Maltos Castilleja Sr., lost his courageous fight to cancer on Sunday October 31, 2021 at the age of 82. Just like he dealt with all experiences in life, Walter fought his illness with strength and grace and passed away peacefully in his home surrounded by his family. Walter is survived by his wife Maria (Mary) Castilleja of 55 years, his three sons, Walter Castilleja Jr of Pasco WA, Louie (Wendy) Castilleja of Kennewick WA, Art Castilleja of Richland WA, his two daughters, Nicole (Jeff) Bentley of Pasco WA, Crystal (Todd Smith) Castilleja of Madisonville, LA; his four siblings, Ralph (Jenny) Castilleja of San Antonio TX, Art Castilleja of Seattle WA, Salvador Castilleja of Grandview, WA, Maggie Pina (Romero Ybarra) of Sunnyside WA. Walter was blessed and loved by his nine grandchildren, Briana, Jenna, Lucas, Alicia, Nicholas, Addison Castilleja; Kellan and Kade Boose; and Bodhi Bentley. He has one great-grandchild Darian (Milo) Ruiz; three step-grandchildren, Exstacy, Keiaira and Curtis and numerous aunts, uncles, cousins, nieces, and nephews. Walter is proceeded in death by his parents Raphael and Alicia Castilleja, sister Dora Gutierrez of Sunnyside WA, and daughter in-law Larissa Castilleja of Bullhead City, AZ. Walter was born on July 22, 1939 in Edinburg, Texas. Walter and his family moved to the Yakima Valley in 1947, where he and his siblings worked alongside their parents as farm laborers throughout the Yakima Valley. He and his family settled in Grandview WA in 1953; he attended Grandview High School and graduated with the Class of 58”. After graduating from high school, Walter went on to serve his country in the U.S Army from 1962-1965, he was a member of the 101st Airborne Division and 173rd Airborne Brigade and served his country with pride. Walter was very active in the Grandview Community, he was a former member with the Knights of Columbus, the first Mexican American to serve on the Grandview School Board, a member of the Grandview and Prosser Veterans of Foreign Wars (VFW) Post 3207 and served on the Grandview and Prosser VFW Post 3207 Color Guard. Walter was very athletic and active in school sports, he was involved in track, wrestling, and football. He was most famous for his boxing legacy as featherweight champ in the Lower Yakima Valley; he loved boxing and continued boxing into his military career where he finished with a 33-3 record. He was charming, witty, and full of personality, so much so, his classmates named him Waldo Presley. After serving in the military and with his GI bill, Walter returned to Grandview WA to pursue his dream of owning land and farming. Alongside farming, he worked for the Grandview Safeway for many years, and owes his time at Safeway to meeting the love of his life. He later went on to work for Atlantic Ridgefield (Hanford) and eventually ventured into the business world where he owned and managed Walt’s Pastime Tavern and Video Mex. During his time as a local business owner, he was proud to sponsor local sports teams and volunteer in the community. He later retired and focused on his first love, farming. Walter farmed for over 60 years and was still farming at the age of 82. We would like to thank Heartlinks Hospice and Atomic for the care they provided to our father. A special thank you to Tim, who went above and beyond his shift to make sure my mother was taken care of during those long nights and Lorray, who gave so much love and care to our dad, our hearts are overwhelmed with gratitude. There will be a viewing on Monday November 8 from 4-8pm at Valley Hills Funeral Home Sunnyside WA. The funeral service will be held at Blessed Sacrament Catholic Church on Tuesday November 9 at 10:00am with the burial to follow at the Grandview Cemetery.

Walter (Walt) Maltos Castilleja Sr., lost his courageous fight to cancer on Sunday October 31, 2021 at the age of 82. Just like he dealt with all experiences in life, Walter fought his illness with strength and grace and passed away peacefully... View Obituary & Service Information

The family of Walter M Castilleja created this Life Tributes page to make it easy to share your memories.

Send flowers to the Castilleja family.