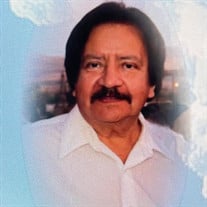 Obituary for Vicente A. Morán Vicente A. Morán, 65, beloved father and grandfather, of Sunnyside, Washington, passed away on November 2, 2021. He was born in Sinaloa, Mexico to parents Vicente and Estefania Morán on December 16, 1955. He came to the United States in 1975 to pursue his love of music. He worked in agriculture before he would go on to earn his U.S. citizenship and begin his academic career. Vicente graduated from Heritage University with a Bachelor of Social Work degree and a Masters of Social Work from Eastern Washington University. He went on to become a Chemical Dependency Counselor, eventually becoming Clinical Director of his own business in Toppenish, Nueva Vida Counseling, in pursuit of helping his (mainly Spanish-speaking) community lead lives of sobriety and fulfillment. He retired from his career in Social Work in 2018. He enjoyed spending time with his beloved children and grandchildren, pet cat, singing, playing his accordion, watching MLB baseball and cartoons, and working on home repairs. Vicente was an intelligent and stoic man who led a quiet life; but to those close to him, knew him as a man with endless puns and jokes with an infectious laugh. He was also known for his long, entertaining stories, which he loved to repeat often. He had nicknames for just about every person he came across as well. Prior to Vicente’s educational journey, he was part of a band called Los Alegres del Norte, where he was the lead singer and accordionist. The group had a fan base that would follow them around Washington and Oregon to listen and dance to the band’s lively música norteña. Music would remain a tremendous influence and hobby throughout his life. One of Vicente’s biggest accomplishments was being a father; he continuously encouraged his children to develop a strong work ethic and to be self-sufficient. He was always there for them through their ups and downs, and taught them to enjoy every moment this human life has to offer. He is survived by his ex-wife, Modesta Zesati; his five children: daughter, Monica Morán Frausto and husband Victor; son, Vicente “Vince” Morán Jr. and Lorena Ramirez; son, Ivan Morán; daughter, Stephanie Morán and fiancé, Steve; daughter, Rosie Concienne and husband Kevin; grandchildren, Anthony, Jasmine, Xavier, Vivica, and Monique. He is preceded in death by his parents, Vicente and Estefania Morán. His children, who died in infancy, Jorge, Moises, and Martha Cecelia Morán. Memorial service is Thursday, November 11, 2021 at Valley Hills Funeral Home in Sunnyside, Washington from 5:00 pm - 7:00 pm. His family will be present to welcome loved ones. Funeral service is Friday, November 12, 2021 at Saint Joseph Parish in Sunnyside, Washington at 10:00 am. Graveside service to follow at Lower Valley Memorial Gardens.

Obituary for Vicente A. Morán Vicente A. Morán, 65, beloved father and grandfather, of Sunnyside, Washington, passed away on November 2, 2021. He was born in Sinaloa, Mexico to parents Vicente and Estefania Morán on December 16, 1955. He came... View Obituary & Service Information

The family of Vicente A Moran created this Life Tributes page to make it easy to share your memories.

Send flowers to the Moran family.