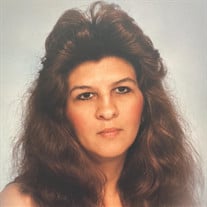 Tina Louise Karel, a beloved mother, daughter, and grandmother, 60, left her home on earth to her forever home with Jesus on 3/29/22. She was born on October 31, 1961 in Yakima Washington to Mary Gallegos and Wayne Karel. Tina is four of five children. Tina lived in Yakima where she attended Adams Elementary, Washington Middle School, and Davis High School. Tina enjoyed being a store cashier, where she had conversations with anyone she crossed paths with. Tina had a smile that would put anyone at ease. She touched the lives of many with her kind heart, words, and smile. Tina had a love for gardening; if anyone had a green thumb, it was Tina. She also had a compassion for animals. There wasn’t a four legged creature she would not stop and give love too. Tina loved spending time with her family, especially her grandchildren whom brought great joy to her. Her face would brighten up at the sight of them. She is survived by her five children: Lisa Gonzales, Frank Gonzales Jr., Misty Gonzales, Jessica Gonzales, and Angel Gonzales, her mother Mary Karel, sister Nona Vasquez, brothers Leslie Karel and Tony Karel, numerous nieces and nephews, 15 grandchildren, and two great grandchildren. Tina is preceded in death by the father of her children, Frank Gonzales Sr.; father-in-law, Jesse Gonzales; brother, Timothy Karel Sr.; and father, Wayne Karel. Tina is now in the presence of the our lord and savior. She will be truly missed by all who loved her, but forever in our hearts. Vigil & Rosary will be held at Valley Hills Funeral Home Yakima Chapel (2600 Business Ln.) on Wednesday April 6th from 3-7 pm with Rosary starting at 6pm. Mass of Christian burial will be held at St. Joseph Catholic Church on April 7th at 10am with burial to follow at Calvary cemetery.

Tina Louise Karel, a beloved mother, daughter, and grandmother, 60, left her home on earth to her forever home with Jesus on 3/29/22. She was born on October 31, 1961 in Yakima Washington to Mary Gallegos and Wayne Karel. Tina is four of five... View Obituary & Service Information

The family of Tina L Karel created this Life Tributes page to make it easy to share your memories.

Send flowers to the Karel family.