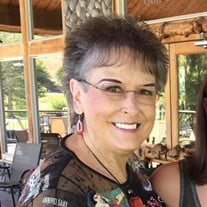 SUZANN LEE NOE Suzann Lee Noe passed away April 30, 2021 at the University of Washington Hospital at age 74. Suzann was born in Seattle WA to Helen L (Emory) Ellinger and James L Ellinger on June 26, 1946. Her family lived in the Lake City area of Seattle where her father owned Lake City Drug. Suzann attended Sacred Heart Villa parochial school until the third grade when the family moved to Moses Lake, WA in the fall of 1954, when her father opened Ellinger’s Drug in a new shopping center, Vista Village. When she was 14, she started working in her dad’s drug store at the old fashioned soda fountain and then eventually graduated to other areas of the store and worked there throughout her high school and college years. She loved working with her dad in the family owned business with her grandfather and also her brother. She graduated from Moses Lake High School in 1964, being very active in drama, plays and various clubs. In her senior year she ran and won the crown of Miss Moses Lake and enjoyed that title very much, representing her city at various parades and activities throughout that year. Suzie, as everyone always called her, always felt that she had the happiest and most idealistic childhood and family life. Her mother was a wonderful home maker and taught her to sew and many other useful life fulfilling skills that she used throughout her whole life. Her family took a lot of fun trips together in their camping trailer going to the beach and visiting Disneyland twice. Their home was located on Moses Lake and they had lots of friends and relatives always visiting. She loved to water ski and did so every night of the summer and was an excellent slalom skier, teaching lots of younger kids how to ski. She also loved to go duck and pheasant hunting with her dad and brother. Their home was jokingly called the Ellinger Hunting Lodge during hunting season as relatives from the coast always came over to hunt. She attended Gonzaga University for two years majoring in elementary education, met her first husband there and married Gary M Vinneau, the father of Jeffrey M Vinneau and Kristin M (Vinneau) Boettcher. After a short marriage, which wasn’t meant to be, she went back to college and graduated from the office skills program. Moving to Yakima in 1979 to be close to her parents who had relocated there, she bought a home and began raising Jeff and Kristin in West Valley. In 1981 she was introduced to the love of her life, Harvey D Noe, a widower, raising two beautiful daughters, Sonia R Noe and Michelle L (Noe) Kalkowski. They bought a house together and were married on March 5, 1983 at Holy Family Catholic Church. She was determined that they were going to all be a family and through her loving and guiding hand, with the love and strength of Harvey, they became a family. Right away they began doing activities and making family memories to bond the four teenage children together and started going on as many camping trips and activities as they could. Their home became the center for all the special family celebrations. Harvey and Suzann bought their first motor home to take their grandchildren camping and make special memories with them and as their children and grandchildren grew, it became a family tradition that the whole family, four generations, would all go to the Oregon coast every summer for ten days in their RV’s for wonderful camping trips. Harvey and Suzann also enjoyed their camping lot at Wonderland and taking trips in their motor home and seeing all the beautiful sights that all the different states in the US had to offer. Suzann and Harvey were married 38 happy and memorable years. Suzann worked as an Administrative Assistant for Picatti Brothers for twelve years, worked for Consulting and Pharmaceutical Services (CAPS) for five years as an Administrative Assistant and finally worked for Catholic Credit Union for twelve years in the Loan Department as a Title Clerk when she retired. In her retirement years she was on the St Paul’s Cathedral Advisory Board, a Eucharistic Minister and Lector, and Secretary for the Viking Crew Selah High School Band Booster Club for three years. Suzann enjoyed working in the yard with Harvey, sewing, home decorating, reading but her best and most favorite hobby was GRANDCHILDREN. She loved them all dearly. Suzann was preceded in death by her grandparents Norman and Ann Emory and Albert G. and Susan P Ellinger, parents James L and Helen L Ellinger, a brother James L Ellinger, Jr. Survivors include her husband Harvey D Noe, son Jeffrey M. Vinneau and partner Christine Mayros of King George VA, daughters Sonia R. Noe and partner Keith Larson of Selah WA, Michelle L Kalkowski (Steve) of San Tan Valley AZ, and Kristin M. Boettcher (Edward) of Waialua HI. Twelve Grandchildren: Luke Hoisington (Amanda), Lindsey R Buckley (Austin), Justin Vinneau (Lauren), Lauren Crago (Levi), Taylor Mayros, Kassie Quesnell, Georgia Quesnell, Kannon Quesnell, Destiny Kalkowski, Kassidy Kalowski, James Boettcher and Sean Boettcher. Four great-grandchildren: Sebastian Pascal, Shelby Hoisington, Jude and Pierson Buckley, and also many nieces and nephews. A memorial mass has been scheduled for May 6, 2021 at St. Paul's Cathedral in Yakima starting at 10am.

The family of Suzann Lee Noe created this Life Tributes page to make it easy to share your memories.

Send flowers to the Noe family.