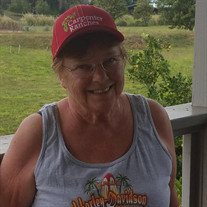 Susan Laine (Withers) Davis Born July 25, 1951, Susan was the second child of Marvin Virgil Withers and Beulah Virginia (Quigley) Withers. Sue’s early years were spent living in Yakima. When her father, working for Webb Logging got a job in the woods north of Goldendale, she moved to a logging camp along Satus Pass with her brothers, Calvin and Andy. Upon moving back to Yakima, Sue learned all about mothering as she helped take care of her youngest brothers, Pete and Shawn, while her parents were building a home in West Valley. Sue graduated from West Valley High School in 1969. She then attended Yakima Valley College, graduating from nursing school as a Licensed Practical Nurse. Sue moved to Seattle and worked in a nursing home. There she met Nancy (Krock) Dalan, who would become her best friend for fifty plus years. Sue moved back to Yakima in 1973 to help her dad with Pete and Shawn after the untimely passing of her mother. Her nursing career would turn to surgery which became her passion. Sue spent over forty years in nursing where she touched the lives of and taught many people. Sue married Robert Heintz in 1977 only to lose him to pancreatic cancer seven months later. She met William (Bill) Davis in a jeep in the spring of 1979. They married in July of 1980. They made their home in Zillah in the house built by Bill’s father and mother. Their son, Kevin Philip was born in August 1985. Sue gladly opened her home to all who needed it, having various family members living there when in need. With a captivating smile, a twinkle in her eye and a beautiful sense of humor, Sue touched many lives. She will be missed. Sue passed away March 25, 2021 from a massive stroke and is now awaiting the return of our Lord, Jesus Christ. Sue was preceded in death by Beulah Withers (mother), Tracy Lynn Withers (niece), Marvin (Pete) Withers (father), Calvin Anthony Withers (brother), and Clinton Joseph (C.J.) Withers (nephew).

The family of Susan L Davis created this Life Tributes page to make it easy to share your memories.

Send flowers to the Davis family.