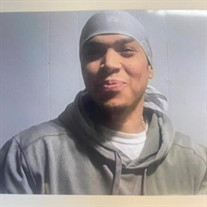 Steven A. Whitenack age 35 passed away peacefully at his home in Grandview, Washington on June 12, 2021. Steven and his twin brother were born on May 25,1986 in Sunnyside, Washington. Steven is survived by his mother, Doris M. Whitenack... View Obituary & Service Information

The family of Steven Andrew Whitenack created this Life Tributes page to make it easy to share your memories.

Steven A. Whitenack age 35 passed away peacefully at his home...

Send flowers to the Whitenack family.