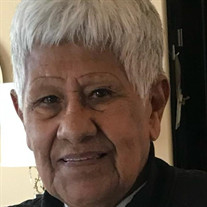 Our beloved mother Silvestra Olivarez age 86, of Prosser, passed away Friday, September 10, 2021, at PeaceHealth Sacred Heart Medical Center Springfield, OR. Silvestra was born on November 26, 1934, in Lockhart, TX to Ascension and Wenceslada Martinez. On February 9, 1952, Silvestra married Israel J. Olivarez in McAllen, Texas. In 1958 they moved to Mabton, WA where she had resided for over fifty years before moving to Prosser WA. Mom worked for the Washington State Head Start Program in Mabton for 25 years, Artz Fox Elementary School in Mabton for 11 years and Meals on Wheels also in Mabton for 2 years before retiring.   Silvestra is survived by her seven children: Irma (Fortunato) De Robles of Grandview, WA; Al (Maria) Olivarez of Kennewick, WA; Velva Herrera, Ruben (Mary Ellen) Olivarez, Sandra Olivarez, Sammy Olivarez of Mabton, WA, Adrian (Leah) Olivarez of Prosser, WA, numerous grandchildren, and great grandchildren. Silvestra is also survived by two bother, Ramiro (Donna) Martinez of Mission, TX, and Henry (Hopie) Martinez of Kent WA. Silvestra is preceded in death by her parents, husband Israel, bother Castulo, sister Pat, sister Marty, and grandson Eloy Hernandez. Mom was such a loved Mother, Mother-in-law, Grandmother and Great Grandmother. Because of her loving personality, she made lifelong friends that cared for her dearly. She will be greatly missed by many, especially her children, grandchildren, and great grandchildren The family would like to extend a big thank you to the doctors and nurses at PeaceHealth Sacred Heart Medical Center Springfield, OR for their dedication in caring for our mother during her time there. Silvestra’s ashes will be buried at the Mabton Cemetery with no graveside services scheduled.

The family of Silvestra Olivarez created this Life Tributes page to make it easy to share your memories.

Send flowers to the Olivarez family.