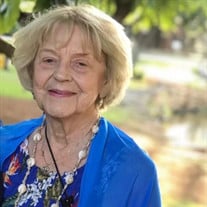 Sidsel Moe Cummings was born on September 10, 1929, in Seattle, Washington to Norwegian Americans, Sigurd and Sigrid Guldjord (Norwegian for “Golden Earth”). Sidsel (Sid) passed away at Yakima Valley Memorial Hospital on June 17, 2021, from complications of pneumonia. Her beloved husband for 62 years, Harry “Ray" Cummings, passed away in 2013. As an infant, Sid, and her mother traveled to Norway to stay with family while Sid’s father, Sigurd, sought work in Seattle and the Yakima areas. Once work was found, they returned to the United States and briefly settled in Wapato, Washington, and then in their beloved Poulsbo, Washington (aka “Little Norway of the Northwest”). Sid graduated in 1948 from North Kitsap High School in Poulsbo. She then started her studies in the fall at Washington State College (later university) where she met and later married (6/30/1951) a “scrappy” young Scotsman Harry “Ray” Cummings. Their progeny included Dale Cummings (Judith), Sharon Leslie (Ted), Ted Cummings (Laura) and Linda Roe (Phil, deceased), who took up their parents’ love for skiing at White Pass and tennis, usually at Larson Park after church on Sundays. As a full time mother of four active children, Sid also held part-time jobs in cosmetics sales, as a travel agent, and as a receptionist for a dermatologist. She volunteered at Wapato Presbyterian Church, sang in the choir, delivered Meals on Wheels, created many a water-color painting, practiced Norwegian in conversation groups, offered aid to anybody in need, and was a tremendous friend to so many. After Ray’s retirement in 1992, they built a beautiful home in Terrace Heights with views of Mt. Adams and Mt. Rainier. They became avid travelers, enjoying adventures in Australia, New Zealand, Tahiti, the Hawaiian Islands, Norway, Scotland, Germany, and many other parts of the world. Sid is survived by her four children, seventeen grandchildren, and thirteen greatgrandchildren. A quote recently found in Sid’s notes reads, “God promises a soft landing – not a smooth passage.” Her family would like to thank the staff at Yakima Valley Memorial Hospital for their loving, professional care. Memorial services will be held on Friday, July 16th in Yakima, Washington. A graveside service will be held at 10:00 am at Terrace Heights Memorial Park and the Celebration of Life service will begin at 11:30 am at the Yakima Covenant Church. Relatives and friends are welcome at each service and the reception following the Celebration of Life Service at the church. Donations in lieu of flowers can be sent In Memory of Sidsel M. Cummings to Yakima Union Gospel Mission Homeless Shelter, 1300 N. 1st St, Yakima, WA 98901, or online at yugm.org

The family of Sidsel Moe Cummings created this Life Tributes page to make it easy to share your memories.

Send flowers to the Cummings family.