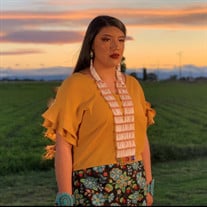 Shawnee LaRee Meninick &#8220;Sah-Lee-Peeps&#8221; Born on July 30, 2002 in Toppenish, WA. She was called back to the Creator November 11, 2021. All her life she enjoyed traveling, Playing Stickgame, and became an all around Champion Pow-wow... View Obituary & Service Information

The family of Shawnee LaRee Meninick created this Life Tributes page to make it easy to share your memories.

Send flowers to the Meninick family.