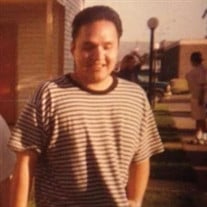 On December 30th, 2021, Scotty Wylopia Jack peacefully left this world to be with our creator. Scotty was born on October 8th, 1973 in Yakima, Washington to Norma Jack (Mosqueda) and the late Charlie Jack of Wapato. He met the love of his life Cecelia F. Jack at the young age of 16, he was too shy to ask her out so she asked him. They were together ever since and on December 12th, 1994 they got married in Wapato Washington. Together they had three children together- Maiya Charlie Jack, Darian Jae Jack and Cosmo Pepper Jack. They spent 27 beautiful blissful anniversaries together and like a true gentleman, his family was always his number one priority. His advice for his children was to find what you love in life and stick with it. He lived and meant those words by dedicating his career in operating heavy machinery to the Yakama Nation Forrest Products for 20 years. He believed that doing what you love made waking up in the morning easier. Even through his declining health, he was a warrior til the very end. In his free time, He was a big fan of the Seattle Mariners and the Seattle Seahawks like his younger brother Geoffrey Sohappy. He loved to take his family out of town and travel to new places just to get out of the house, he loved his firearm collection and watching his mafia/military movies. His kids were always one of his biggest motivations, even the children that he was not the biological father to, he was always the father figure. He would say he owed it to his own father that he loved and missed dearly. The day he became a grandfather you could tell he felt complete. Scotty was preceded in death by his infant grandson Charlie BlackHorse Jack and his father Charlie Jack. He is survived by his mother Norma Jack; his wife Cecelia Jack; his 3 children, daughter Maiya Charlie Jack, daughter Darian Jae Jack and son Cosmo Pepper Jack; his three grandchildren, granddaughter Ren Scotty Contreras, grandson Harley Rae Gepner Jr, and grandson Myka (Tater Tot) Hall. He is also survived by his siblings; sisters Wilda J. Elkins, Tina K. Cree, Shellie L. Jack, Nicole Jack and brother Geoffrey L. Sohappy. Dressing & Overnight Services were held at the toppenish longhouse Tuesday January 4th. Burial was at White Swan Methodist Cemetery Wednesday January 5th at 7am.

On December 30th, 2021, Scotty Wylopia Jack peacefully left this world to be with our creator. Scotty was born on October 8th, 1973 in Yakima, Washington to Norma Jack (Mosqueda) and the late Charlie Jack of Wapato. He met the love... View Obituary & Service Information

The family of Scotty Wylopia Jack created this Life Tributes page to make it easy to share your memories.

Send flowers to the Jack family.