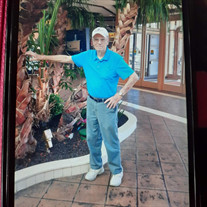 Sam George Derby, 90 of Yakima, WA passed away peacefully at his home on December 18, 2020 surrounded by family. He is survived by his youngest sister Marilyn Swanick of Buffalo; his four children: Peggy Emhoff (Keith), Kirk Derby (Karna), Laura Lee Carroll (Bill), and Robin Smith (Mark), and his devoted dog Freddie Jr. Also, nine grandchildren, 14 great grandchildren, and nine great great grandchildren, several nieces and nephews of Buffalo and Payette, ID. He is preceded in death by his wife Eydie, grandson Austin Derby, and sister Ruth Derby. Sam's Story Born in Buffalo, NY on April 1, 1930 to George & Dorothy Derby. His first 30 years of life were spent living in the city with his parents, two sisters, and many French Canadian relatives. He attended Kenmore High School and worked very hard at a young age to help his family. A testament to the times of the depression era. No odd job was too small for the young Sam. From sweeping the local grocery store, spreading soil for a construction company or being a coal handler. In 1950 (20 years old) he enlisted to become a Marine, eventually serving on the front lines in Korea. But, before he left New York for the war, on a blistery Christmas Eve at Niagara Falls, he married his childhood friend and love of his life Eydie Cuff-Derby. In the early years Sam & Eydie loved to celebrate life with their friends, bowling, golfing, playing cards and games but especially dancing. They became competitive dancers in New York and boy could they dance. Sam spent 7 years as a Marine. In 1951 he ironically shipped out on the “ss Darby” for a month journey in horrible seas to the shores of Korea. During his time there he was on the frontline and became a decorated soldier with two purple hearts rendering him to Sergeant in just two years. He said he “never really understood how he came out of it alive”. Gratefully he did, because once back from Korea he & Eydie set their sights on a new “frontline”, parenthood! Soon after his return from Korea they were blessed with 4 children from 1953 to 1962. After his active service, he remained in the Marine Reserves for 5 more years while working for the Niagara Power Company in Buffalo, NY…just as the past 2 generations before him. In 1960 a family member (Alfred & Madeline Bartorelli) convinced them to move out west with all the kids and Grandma Ethel Helen Cuff to Yakima, WA. He said “this was his second greatest life adventure outside of the War”. Sam’s first job in the Valley was with…Harold H. Schultz Furniture. There he did a bit of everything but enjoyed the up and coming world of electronics. Schultz needed someone to learn how to fix transistor radios & TV’s. Sam was one of the first to dive in and get trained on circuit boards and picture tubes. From there his career in Television took off. Soon he was able to open his own business and eventually his own shop... Derby’s TV Sales & Service for 48 years. In the early and later years of his TV career Sam always had an office in the Garage. They even built a phone booth in one house so Eydie could take calls while Sam hit the road to fix TV’s. He logged thousands of miles in his trusted van’s, visited with customers, knew their children and pets. All of that lead them to helping those “without” resources with an occasional meal, ride to the Doctor, etc. There are many memories of Sam coming home from a sales call with a story about helping someone in a car accident, taking an injured animal to the vet, you name it – he’d always dive into help, no fear! After being on the “front” in Korea he seemed to be able to handle anything. When not working, Sam spent time with his wife. Over their long 61 year marriage filled with lots of work and fun, they still found time to manage many home building projects; designing & building four homes, a retail business - the Cottage Deli & Cafe (now McGuire's Pub) and their cozy cabin at Rimrock Lake giving them time to relax, do some fishing and have some new adventures with family and dear friends. Through his retirement years, Sam continued to put the “petal to the metal” and drove around Yakima as much as he could. If not, he’d be kicking back watching TV, visiting with friends and family, walking his dogs or playing golf. He was a devoted golfer at Westwood Golf Course, dedicated volunteer and honorary member. Like so many Veterans who saw so much hardship on the battlefield and lived to talk about it, Sam loved his country, he wanted to help reshape it with a big family & work to be proud of. His true grit, spirit and determination will truly be missed by his family and all who shared time with Sam over the years. For those wishing to join our family we will be having a military graveside memorial service at 1:00pm on June 14, 2021 at Terrace Heights Memorial Park. If you wish to make a donation in his memory please consider the "Wounded Warrior" fund.

The family of Sam Derby created this Life Tributes page to make it easy to share your memories.

Sam George Derby, 90 of Yakima, WA passed away peacefully at...

Send flowers to the Derby family.