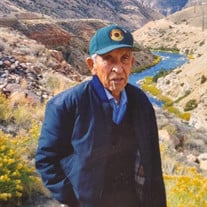 Not sure what to send?

With heavy hearts we announce the passing of our beloved father, grandfather, and patriarch, Rudy Cruz. He was 95 years old at the time of his death and had lived a long and contented life before dementia consumed him. He was surrounded by close family members as he took his last breaths and was freed from the constraints of age, health, and illness to join our mom once again. Rudy was born on July 29, 1926, in Fairmont City, IL, to Selso (Joe) and Petra Garcia Cruz. He was the middle child of four other children and was the most adventurous, rule-defying of them all. Although this would sometimes get him into trouble, it was his kind, loving, and generous nature that he was known for by family and friends. He attended Wapato Schools and began working in the orchards and fields at an early age. At the age of 17 he enlisted into the U.S, Army towards the end of WWII. He was stationed in Hawaii, Guam, and The Philippines and was always ready to share stories of his travels in the Pacific. He was very proud to have served his country and showed his loyalty by proudly wearing his military caps and being a member of the local American Legion. Shortly upon his return to the Yakima Valley, he met, fell in love with, and married Alice Gonzales in 1951. They entered a union that lasted 68 years. They created volumes of memories of trips, holidays, celebrations, love and laughter for their two children, Sylvia and Victor, and their eventual extended families. His home and garden were havens for the grandchildren and all other family members/visitors who frequently stopped by. His self-taught carpentry skills decorated his yard with beautiful creations of wooden flowers, butterflies, wishing wells, and garden furniture. He was well-known for his love of wrestling and the support he gave the Wapato High School wrestling program. He was honored as Wrestling Fan of the Decade in 1987 by the Wapato School District. His yellow pickup was a common site in downtown Wapato, known by many. Dad was preceded in death by his loving wife, Alice, his parents, his siblings Fausto Cruz, Consuelo (Connie) Cerna, Guadalupe Cruz, David Cruz, and his son in-law, the late Benny Facio. He is survived by his children Sylvia Cruz Facio, Victor Cruz (Kim), grandchildren Tony Facio, Allison Facio-Garza (Jesse), Alex Facio (Antoinette), Nicholas Cruz (Jen Jenkins), Ciara Richardson (Tyler), and great grandchildren Joaquin Tobia-Sanchez, Phoenix Sanchez, Nicolas Sanchez, Miliano Sanchez, Solice Garza, Azariah Facio, Amarie Facio, Nixon Richardson, and Jaden and Blake Garza. He also leaves behind many cousins, nieces, nephews, and friends. We all love you and will miss you so. Rest in eternal peace, Dad. A graveside service and Celebration of Life are planned for a later date to recognize and memorialize our parents, Rudy and Alice Cruz, together once again.

With heavy hearts we announce the passing of our beloved father, grandfather, and patriarch, Rudy Cruz. He was 95 years old at the time of his death and had lived a long and contented life before dementia consumed him. He was surrounded by close... View Obituary & Service Information

The family of Rudy Cruz created this Life Tributes page to make it easy to share your memories.

With heavy hearts we announce the passing of our beloved father,...